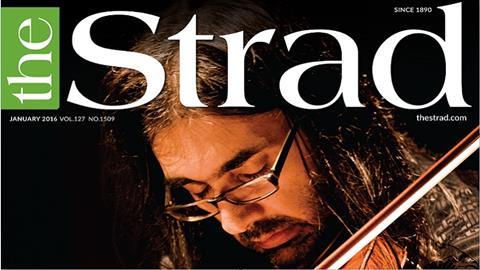 2016: twelve great issues of The Strad. Here are some pieces of inspiring wisdom from the artists featured in The Strad this year...

'If you ask me how many times I've played the Sibelius Concerto, I don't know, but it's definitely in the hundreds. So what does that mean - that I should have had enough of it? No. I'm still changing, I'm still thinking, I'm still trying to understand if I'm doing right or wrong, if I can convince myself in my decisions or not. I think this is how human beings should be. You should be able to reject all your knowledge in one day if you're convinced you need to, and restart from zero.'

'My teacher Philippe Muller was always there helping me to develop my personality. He was not there to make clones of himself. He was more like a guide, and I’m so thankful for that, because I think it’s very important to develop your own voice. You need someone very open-minded for that, though.’

'The biggest problem with today’s playing is that people want to sound smooth and nice; everything is ironed out flat. Because instrumentalists make sounds without words, we often forget about telling a story. We get so bogged down with technical aspects of playing that we forget to give that big, open, direct message, which a singer does much more naturally. I use songs, speech and gesture every day in my teaching and practising, because when you listen to music, you want to be told something. The singing voice, breathing, all the things singers do naturally – these are what we should aim to emulate as string players.’

'People complain that classical music is dying, but we've never had so many concerts before in history. Actually it was never a thing for big masses of people. If you listen to the Goldbergs or a late Beethoven quartet, it's meant to be for a small group of people; it's meant to be intimate. Of course, there are great symphony and opera performances, but a small number of people coming to hear a Bach partita or a Mozart quintet - that, for me , is classical music. It's how it used to be. It's why I love playing the violin.'

'Menuhin would always try to let the student find their own voice, but there were certain things that he believed very strongly. if you played the solo entry at the start of the Brahms Concerto in a wayward manner, he'd definitely object. I don't mean that it has to be metronomic, but if you pulled it about too much, he'd put his foot down. On the other hand, if you came up with spontaneous suggestions, that might fire his imagination, he'd come back with even more ideas. In that sense he was the most original musician I've ever met.'

'Jackie had a capacity to imagine sound such as I have never met in any other musician. She did not know what it was to have technical difficulties or what it meant to play safe.'

'When you are a student, there are so many talented musicians out there and one of the first things festivals and conductors look for when organising their concert season is whether you have won a prize in a competition. Winning certainly can’t sustain a career, but it does open doors. It’s then up to you to show improvement and innovation if you are truly to stand out from the crowd and build a career.’

'For many years my teachers tried to change my left-hand technique, because I don't have the perfect position with four fingers forming a bridge, one after the other. I thought it was just that my hand didn't work that way, but after several years I thought no, I could do it if I wanted to. The problem is that with this 2perfect2 technique I couldn't realise the extreme differences of sound and colour that I was looking for because when I put my fingers in a perfect bridge there was just one colour. So I wasn't free.'

'Everybody is equal, it's the circumstances that makes you a better or a worse person and if you give people music, they'll be better human beings. I would love to go and play in the favelas. it's the same thing with the townships in Africa. Is it good? Is is bad? I don't know, but I want to do it. I think if you play some Bach to anybody they shut up and start listening. It's so perfect that there is going to be a positive reaction.'

'We say what we want to say to each other, and that’s it. Collaboration is fantastic when you get past diplomacy – when you know each other so well that you know what the other person thinks and how they feel, and you can just be yourself. We know each other in every situation: jet-lagged, furious, not knowing what we’re playing in a concert the same evening. It gives us such a good ground.’

‘In theatre and in dance we often see collaborations with contemporary art forms, so I don’t understand why we don’t have more of that in classical music. When you look at jazz, or rap, or hip-hop, there are many truly great artists, but they are not working in our art form. So I started thinking: why are we not friends? Why are we not in touch with what is happening? Coming from a background where everyone plays classical music, it is not clear how what we do serves our community. We need to reflect the diversity of the cities we live in. We need to draw on that idea of art being embedded in communities.'

'At one point Menuhin took my violin and played a great chunk of the first section. I was astonished at the sound he made. There was such concentration and intensity; he was locked into the music and I had the very powerful experience of standing next to somebody whose entire body was being used to create this incredibly powerful music. One very important thing I learned that day is that it’s the player who makes the sound. A very fine violin will make a difference to your playing, without question, but a really great player can make any instrument sound reasonable.’