'Your principal practice should be confined to the use of the bow,' says violinist Aaron Rosand 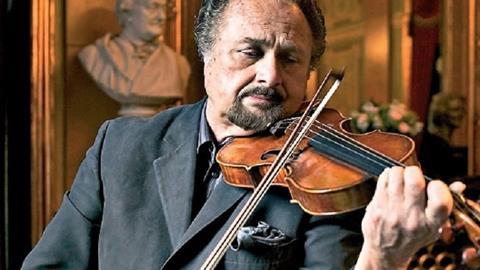 To improve your playing, your principal practice should be confined to the use of the bow in order to achieve complete command in the execution and expression of the music to be played. How you draw the bow will determine the quality of sound that you produce. The control of this rests mainly in the fingers of your right hand, as these are the principal players in the procedure.

The way to practice this technique is best on open strings. I spent six months on the A string when studying with Leon Sametini who was a disciple of Eugène Ysaÿe.  At the time I was twelve years old. He would bring tears to my eyes when rapping my wrist with a stick if it was raised, and I did not pronate properly at the point and frog in a figure eight fashion.

To begin, set the bow lightly on the string and gently press with fingers, not arm, when drawing to produce a swell by small degrees to its forte. Repeat the process from point to frog on the up bow and continue this until you can master the swell with appropriate bow speed and fine quality of sound. Begin with minutest softness increasing the tone to its loudest degree and diminishing it to the same point of softness with which you began in the same stroke of the bow. Every degree of pressure upon the string that the expression of a note or passage requires will become easier to negotiate. Mastering this bow technique will elevate your level of playing immeasurably.

To acquire the wrist action that is necessary in rapid détaché passages or movements  I strongly recommend practising Kreutzer Etude no.7. Begin at the point with an up bow slowly in marcato fashion with space between notes and gradually build up speed. Move towards the middle of the bow and repeat the process, always keeping the wrist flexible and manipulating the strokes with your fingers. Remember to keep the fingers closer together as they must work in unison. Do not extend the index finger as this will tighten the wrist. Now reverse the procedure starting with a down bow.

You are now ready to begin rapid passagework. For this I would recommend the fast movements of the solo Bach Sonatas: the Presto of no.1 G minor or the Allegro of no.2 in A minor. Start slowly, as you did with the Kreutzer etude, with space between the notes, keeping in mind that you are working with your fingers and loose wrist. Gradually build up speed and keep your arm relaxed. Do not stiffen your wrist as the tempo increases.

Again I want to emphasise the bow grip. In previous articles, I discussed the Franco-Belgian and Russian schools that are predominantly in use today. Most importantly do not grip tightly. The hand and fingers must constantly be relaxed to produce the best results in legato or rapid passage work. Remember that we always play in circular motions and the sensitivity of the fingers is the key to mastery of the bow.