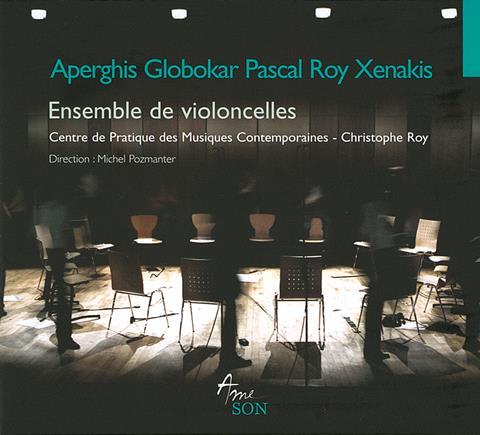 There’s no question that this French cello choir from the catchily titled Centre de Practique des Musique Contemporaines is a crack ensemble. Its director, Christophe Roy, chooses the repertoire, trains the musicians and then hands over the reins to another director – in this case Michael Pozmanter. That the unusual division of responsibility works is evident from the strong sense of confidence and purpose in all these performances. You would only know they were live recordings from the interesting but erratically presented and proofread booklet; performance and engineering are of a clarity usually associated with studio sessions, but the concert format administers an injection of energy and drama on which the Xenakis and the Aperghis thrive.

These are much the most distinctive contributions here: ‘interesting but erratic’ pretty much covers the quality of invention, too. Windungen is about as friendly as Xenakis gets, fully exploiting the sensual potential of the twelve-cello sound world. Georges Aperghis is another Greek émigré to France, from a generation later, using a similarly bold harmonic palette but motivated by much more human and narrative preoccupations than his elder. Totem is an impressively sustained 15-minute ritual, with an apt sense of timeless force and plenty of scope for individual virtuosity. You might think the same would be true of the piece by Stockhausen’s old sparring partner, Vinko Globokar, with its punning title on joy and friendship, but the paucity of musical material is explained by a dramatic conceit: the players all sit in a circle with their left hands on the next person’s shoulder. At least it’s distinctive, unlike the academic density of Camille Roy’s Tresses. In the middle sits an intriguing, hymn-like bonne bouche from Robert Pascal. It’s a brave album, and Ameson is a label to watch.