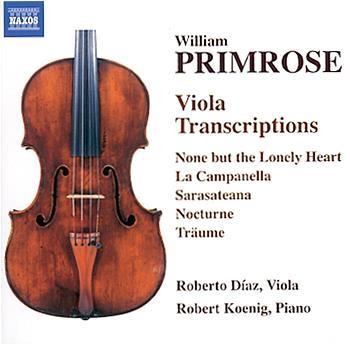 William Primrose, in Yehudi Menuhin’s words ‘the first star of the viola’, was fond of peppering his concert programmes with short virtuoso pieces, of which he himself concocted a respectable number. The present selection is a varied one, combining the expected soulful morsels (Borodin’s Nocturne, Schubert’s Litany, Tchaikovsky’s None but the Lonely Heart) with more extrovert fare (Paganini’s La campanella, Zimbalist’s Sarasateana) and including a few first recordings.

Roberto Díaz possesses a formidable technique; indeed, his renditions of this music can stand comparison with those by Primrose himself – I can pay no higher compliment. Thankfully, Díaz doesn’t try to imitate Primrose’s impish phrasings and rubato, always being his own man. His embellishments in the Hispanic riot of Sarasateana (not strictly a Primrose transcription: it was arranged for Primrose’s use by its composer, the violinist Efrem Zimbalist) ring absolutely true, as do the South American pieces by Villa-Lobos (Aria), Valle (Ao pé da Fogueira) and Aguirre (Huella). Too bad that just three movements of Beethoven’s Notturno are played – I would have loved to hear Díaz in the complete work (I heretically think it works better in Primrose’s version, which gives to the viola much of the piano’s passagework).

The recording was made in the CBC’s Glenn Gould Studio and places the instruments in a much more helpful acoustic than Primrose ever had back in the 1940s. I mention this because Díaz plays the glorious ‘Primrose’ Brothers Amati viola, making this an ‘original instrument’ recording of sorts. I hope that a second volume is being planned.