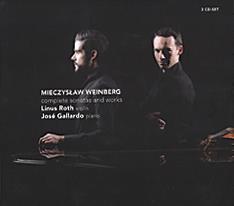 Anyone who adores Shostakovich’s violin music should find Weinberg’s distinctive musical voice very much to their taste. He too found a way of expressing the dark side of human existence with a sardonic edge that appears for the most part to have gone over the heads of Stalin’s artistic henchmen. His magnificent series of six violin sonatas is only patchily represented on disc at present, most notably via a distinguished release of nos.1 and 4 alongside the op.46 Sonatina and op.82 solo violin sonata from Yuri Kalnits (Toccata Classics). This new set from Linus Roth and José Gallardo is particularly valuable in that it features all six sonatas, the Sonatina, three early pieces dating from the 1930s and the Rhapsody on Moldavian Themes.

If the First Sonata (1943) is a fascinating musical amalgam of everything from Beethoven to Shostakovich, just four years later the Third Sonata encapsulates the neo-Classical double entendres and unsettling harmonic sidesteps that would become Weinberg’s creative bedrock. Recorded in exemplary, perfectly balanced sound, Roth and Gallardo capture the sense of despair that underpins the composer’s later music with nerve-jangling precision, most hauntingly the Sixth Sonata, composed in the wake of his discovering gruesome details of his family’s annihilation during the Holocaust. It is their exploration of the lower end of the dynamic spectrum that particularly grips the imagination here – at times Roth appears to be merely breathing on his 1703 ‘Dancla’ Stradivari as he fearlessly probes Weinberg’s harrowing cries of anguish. Not an easy listening experience by any means, but a profoundly moving one.