The two performers will replace second violinist Sibbi Bernhardsson and violist Masumi Per Rostad, who will leave their posts at the end of the 2016-17 season 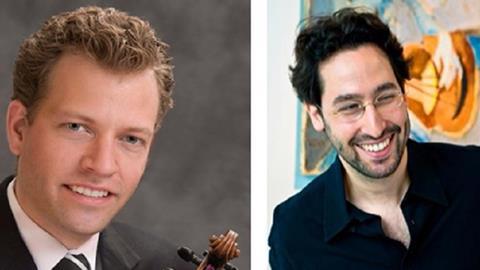 The Pacifica Quartet has announced that violinist Austin Hartman (pictured, left) and violist Guy Ben-Ziony (pictured, right) are to join the ensemble.

The two performers will replace second violinist Sibbi Bernhardsson and violist Masumi Per Rostad, who will leave their posts at the end of the 2016-17 season to take up teaching appointments at the Oberlin Conservatory School of Music and Eastman School of Music respectively. Sibbi Bernhardsson  joined the Pacifica Quartet in 2000, while Masumi Per Rostad was appointed to the group in 2001.

Founding members cellist Brandon Vamos and first violinist Simin Ganatra jointly commented: 'Over the past 17 years, the Pacifica Quartet has played nearly 1,500 concerts all over the world from the monumental cycles of Beethoven and Carter to numerous premieres. We have traveled together, laughed together, learned together. The special bond we all share has greatly influenced us as musicians, artists and human beings. Our respect and admiration for all that Sibbi and Masumi have contributed to the quartet is boundless.

'As we see them off and wish them well on their next adventures, we are thrilled to welcome both Guy and Austin to the ensemble at the start of the Quartet's 23rd season. Both share a strong passion and dedication to performing at the highest level. They are the perfect fit for the ensemble as we look to the future and prepare to embark on new, exciting projects ahead.'

Austin Hartman was a founding member and first violinist of the Biava Quartet, with which he won the Naumburg Award, and has previously served as assistant professor of violin at the University of Indianapolis.

Israeli violist Guy Ben-Ziony  was a member of the Zapolsky String Quartet and the Waldstein Ensemble Wien and has served as a professor at the University of Music and Theatre 'Felix Mendelssohn Bartholdy' in Leipzig since 2006.

Last year it was announced that Pacifica Quartet founding first violinist Simin Ganatra was to leave the ensemble at the close of the 2015-16 season to concentrate on her expanded role at Indiana University’s Jacobs School of Music, and on other musical projects. However, a change of plans led her to reverse that decision and remain with the group.