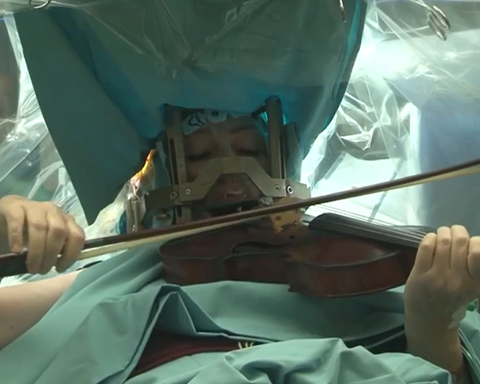 Just a month after it was reported that Minnesota Orchestra musician Roger Frisch played his violin during brain surgery to cure his essential tremors, another video has emerged showing Naomi Elishuv, a former violinist in the Lithuanian National Symphony Orchestra, undergoing the same operation with equally impressive results.

A common condition, the tremors are caused when the part of the brain which controls movement misfires, sending erroneous signals to the body’s muscles. Deep brain stimulation is procedure which involves implanting an electrode into the brain which sends signals to counteract the bad pulses. Elishuv was operated on at the Tel Aviv Sourasky Medical Center.