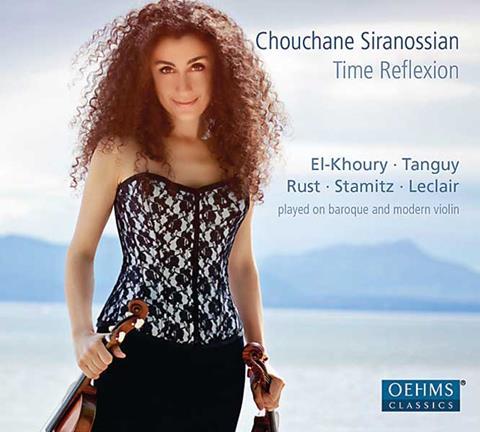 If pretentious titles usually put you off heterogeneous concept albums, hold your horses. This one contains first recordings of two substantial and fascinating late Baroque /early Classical solo works by Rust and Stamitz, dispatched by Chouchane Siranossian on a Gagliano with a period set-up with terrific verve and unfailing good taste. Besides the evident intellectual curiosity of this French–Armenian violinist in reviving two figures on the margins of central European culture between the glory years of Bach and Mozart, there’s much to admire in her rhythmic security and gently playful approach to the dance forms, especially in Rust’s Second Sonata, which is technically demanding and inventive in equal measure.

Siranossian is joined by Rüdiger Lotter for a bold and dashing account of Leclair’s op.3 no.5, no less intense than a preceding pair of soliloquies by Bechara el-Khoury, Arminia (slow, soulful) and Perpétuel (you get the idea). More substantial is the Sonata for two violins by Éric Tanguy, which playfully references a Baroque moto perpetuo in movements either side of a rhapsody of overlapping lines, like the Bach ‘Double’ with added swing. Her partner here (on a modern set-up) is Jean-Marc Phillips-Varjabedian, and then the duduk player Levon Chatikyan for a final, wistful nod to her Armenian heritage with an arranged hymn-like song, Havun-Havun, by an early medieval Armenian mystic. Siranossian writes her own thoughtful booklet note linking these pieces; I hope to hear much more of her.