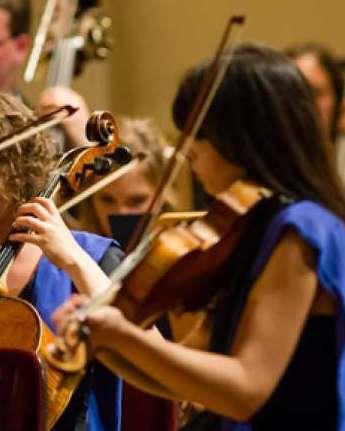 A Viennese university study has found that orchestral musicians’ stress responses are governed not only by the anxiety of public performance, but also by mood – and that, as a whole, first violins demonstrate the highest levels of stress, both on and off the concert platform.

The research - carried out over two days in October 2011 and published last month by the MedUni Vienna and the city's Health and Prevention Centre - tested levels of the stress hormone cortisol and the enzyme myeloperoxidase, which is regarded as a risk factor for cardiovascular disease. The conductor and 47 musicians of the Vienna Radio Symphony Orchestra were analysed at the dress rehearsal and on the day of a performance of Sibelius and Shostakovich in Vienna’s Musikverein. Saliva and blood samples were taken before and after each performance, as well as during the concert and rehearsal intervals.

While the findings of increased stress levels on the day of the concert were to be expected, it was also discovered that emotional factors played a part, and that a positive frame of mind reduces stress-induced levels of myeloperoxidase.

‘The result is clear-cut,’ said Alexander Pilger from the MedUni’s Institute for Occupational Medicine. ‘In the acute stress situation on the day of the concert, the myeloperoxidase increases just as clearly as does the overall release of cortisol.’

However, it was also found that feelings of ‘unpleasantness’ and despondency experienced by some musicians, by their own assessment,  on the day before the performance were likely to account for higher myloperoxidase releases, too, while those in a more positive frame of mind demonstrated lower levels.

‘The musicians in the first violins and the conductor had on average higher myeloperoxidase levels - not only at the dress rehearsal but also in the concert - than all the other musicians together,’ Pilger continued.

However, he told The Strad, ‘our comparison between the levels of myeloperoxidase in musicians with leading and non-leading instruments [throughout the orchestra] revealed no significant difference in mean myeloperoxidase concentrations.'