Lincoln College, which manages the Newark School, has been stripped of its licence to issue international student visas following a poor Ofsted report in 2016 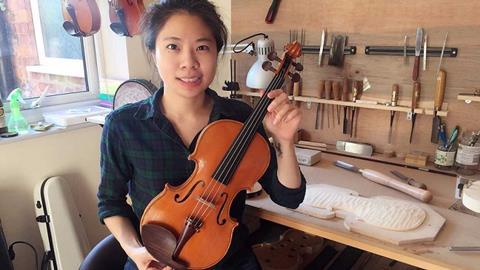 Several international students at the Newark School of Violin Making in the UK have been told that their visas will be revoked following a poor rating from Ofsted (Office for Standards in Education, Children's Services and Skills).

The Newark School is managed by Lincoln College, which was assessed by Ofsted in May 2016. It was found that in the five years since the college's previous assessment in 2011, the institution had dropped from 'outstanding' to 'needs improvement' in a number of key areas. However, according to tutors at the Newark School, musical instrument craft courses were not covered by that inspection.

As a result of the Ofsted assessment, Lincoln College's licence to sponsor visas has now been revoked. From September 2017 none of the courses managed by the college will be able to accept international (non-EU) students as they will not be eligible for Tier Four student visas.

Thus four of Newark's current students - Lingtzu Chen (pictured) and Meng-Hsiu Tsai from Taiwan, Daniel Chick from Australia, and Yasuhiro Nakashima from Japan - who have already embarked on the violin making course and have been paying international fees, have been told that they must leave the school at the end of the current term.

Jim Newall, group head of marketing and communication for Lincoln College Group, has issued the following statement to The Strad:

'The School of Musical Instrument Crafts is currently unable to accept new overseas students until such a time that it regains its Tier Four Status.

'A strong focus on further improving education should mean an Ofsted 'good' grade when it is likely to be re-inspected in the Spring. This will lead to it regaining its Tier Four Status.

'As a result of these developments four overseas musical instrument crafts students will not be able to stay in the country to complete further studies. All will be given full accreditation certificates for the years they have completed, made an offer of compensation and be offered guaranteed deferred places at a significantly discounted rate when we regain our status. We are also exploring alternative UK training providers who could help them complete their studies.

'We are continuing to develop and invest in the School of Musical Instrument Crafts and we are working with Hull University to validate a degree-level course.'

Supporters of the four students have launched a Facebook campaign, asking those with a connection to the school to contact their local government officials about reversing the decision.

'It’s a gross injustice to current international students to deny them the possibility of completing their studies when they have invested time and money and there is no doubt of the validity of their course.

'It is a grave slur on the reputation of the violin school, that it is tarred with the same brush as courses run in Lincoln, given its huge international reputation and success in producing violin makers with worldwide reputations over decades.'