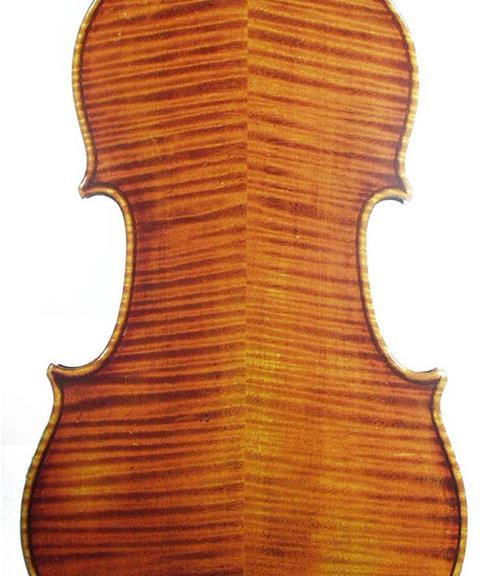 A 1924 violin by Ansaldo Poggi that was stolen more than five years ago has been recovered by Italian police. The instrument was taken in November 2008 when thieves broke into the safe of Bologna luthier and dealer Roberto Regazzi. Police recovered the violin (pictured) after a musician in Bologna who was approached by the thieves about buying the instrument recognised it as the stolen Poggi. A deal was set up and the police seized the instrument and arrested the thieves at the scene.

Regazzi said that the violin had suffered some damage. 'The neck was broken, but it's not serious, and after a graft it will be fine. It may well have been broken during the theft itself, perhaps because the thieves were in a rush to leave. The rest of the violin is undamaged.'

Regazzi suspects that the theft could have been commissioned by someone, as there were several high-value instruments in the safe but the Poggi was the only violin taken. 'Usually in these kinds of thefts, the thieves either take everything in the shop or pick things at random. But on this occasion they took just this particular violin. One possibility is that if the theft was on commission, whoever commissioned it may not have wanted the instrument in its damaged condition.'

The instrument dates from a year after Poggi set up on his own in Bologna, having trained with Giuseppe Fiorini since 1921. In 1919–20 Fiorini had purchased the tools, forms, templates and other relics of Stradivari's workshop, allowing Poggi access to a fresh source of knowledge and insight. 'In my opinion,' said Regazzi, 'this 1924 violin is a top example of Poggi's work, fresh from the Fiorini school. I had the chance to purchase it many years ago, and it's one of the best-sounding violins I have heard. So I'm very glad to have it back.'

Regazzi said the incident offered some lessons for victims of violin theft. 'It's always important to make sure the instrument is on the internet and on databases of stolen instruments, so people can see if it is stolen or not. And it's good to have a personal network of musicians and dealers who can access such information. In this case, the thieves told the prospective buyer before the deal that the violin was in need of a little restoration, and that this could be done for about 800 euros. So it's quite evident that at some point they had gone to a shop to ask about the instrument's value and the cost of restoration. Either the person at the shop didn't know anything about violins, or they didn't want to say anything and be part of the recovery process. Both situations are not good. The professional way is to be knowledgeable and aware and work together against the criminals.'