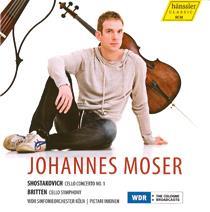 Shostakovich and Britten, friends and mutual admirers, always make a good pairing, with Rostropovich, the dedicatee of both works on this disc, bonding them still closer. Shostakovich was present when Britten conducted the Cello Symphony’s premiere in Moscow in 1964, five years after that of his own First Concerto.

German cellist Johannes Moser has his Moscow connections too, having won the Tchaikovsky Competition there in 2002. His playing has grown in stature over the last few years and he takes on the soloist’s mantle here with real authority. Shostakovich’s first movement gains energy from his punchy and precise playing, with the excellent recording highlighting each line of the spare orchestral textures. Moser’s 1694 Andrea Guarneri, searing in the stressed, high passages of the first movement, takes on an ethereal sweetness in the high tessitura theme of the second and speaks out eloquently in the cadenza.

From the stark, uncompromising chords that open the Britten, Moser once again appears totally in control, though some of the impetus is lost by conductor Pietari Inkinen in the middle of this movement. The presto scherzo feels full of vitality, with Moser digging into the lower strings, and his solo cadenza in the middle of the Adagio, alternating spread chords and tremolo pizzicato, is skilfully accomplished.