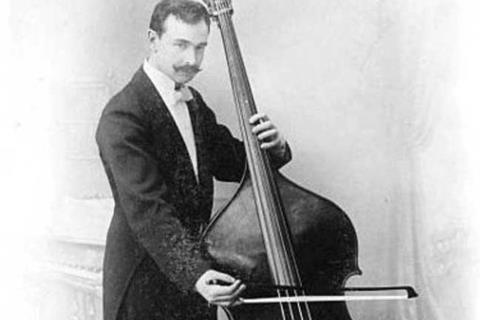 Russian born Serge Koussevitzky began his career as a double bass soloist but was best known for his 25-year stint as conductor of the Boston Symphony Orchestra. Raised in a musical family, Koussevitzky's initial instruction in music came from his parents until he was granted a scholarship to study double bass and music theory at the Musico-Dramatic Institute in Moscow at the age of 14. His first professional venture came with the Bolshoi Theatre Orchestra at the age of 20, where he would later succeed his teacher, Josef Rambusek, as the principal bassist. As a soloist, he made his Moscow debut in 1901, and won critical accolades for his first Berlin recital in 1903. Koussevitzky entered the world of conducting in 1908 with the Berlin Philharmonic Orchestra. From 1909 to 1920, when Russian society and politics was in turmoil, he established himself as an eminent conductor in Europe before briefly returning to his homeland after the Revolution to conduct the State Symphony Orchestra in Petrograd. In 1920 he traveled to Paris before accepting the directorship of the Boston Symphony Orchestra in 1924. Under his stewardship, the Orchestra experienced a golden era in their history, commissioning important works from Copland, Samuel Barer, Leonard Bernstein and Koussevtizky's old friends, Stravinsky and Ravel. In 1940, he established the Koussevitzy Music Center at Tanglewood - the Boston Symphony's summer home - and in 1942 formed the Koussevitzy Music Foundation in memory of his late wife.