They approach Bach’s music from opposite sides of the historical divide, and the results make for a fascinating exercise in comparison 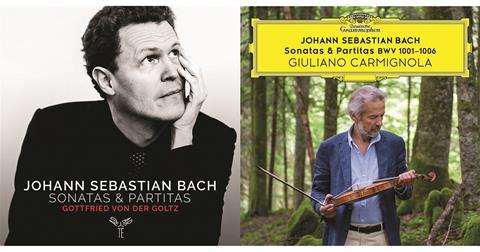 The two sets under consideration, both using instruments in Baroque set-up, provide rather different listening experiences owing to the recorded balance. Giuliano Carmignola’s 1733 Pietro Guarneri of Venice is brought into the closest of focuses, which sensuously underlines the different tonal qualities of each string – and the subtle use Bach makes of them – but by the same token causes a few uncomfortable sounds when the E string at full blast catches the microphone. On the other hand, Gottfried von der Goltz’s slightly older Paolo Antonio Testore is heard from a safer distance with no loss of presence or detail.

Von der Goltz, founding leader of the Freiburg Baroque Orchestra, has specialised in historic performance practice since his student days, whereas Carmignola came to it at a relatively advanced stage of his career. They approach Bach’s music from opposite sides of the historical divide, and the results make for a fascinating exercise in comparison that doesn’t always turn out as one might have expected (to give but one example: it is the bona fide ‘Baroque’ player who indulges in a Stokowskian spiccato in some echoing passages of the G minor Fugue, while Carmignola makes the same point much more subtly).

Both players approach the written text with great freedom, by which I don’t mean just agogic flexibility – of which there is plenty, particularly from Carmignola – but also a considerable amount of embellishment that occasionally amounts almost to rewriting. Reactions to this trait are bound to be subjective; I found the most successful embellishments to be those derived from the motivic material, which fit in without drawing attention to themselves, as several ungainly trills and frills do elsewhere throughout both sets.

It goes without saying that both violinists are in complete command of their assignment, technically and musically. After many hours of listening (calling upon several older Bachians such as Szeryng and Szigeti), what stays in the mind? I think of von der Goltz’s refined voicing of the G minor Fugue, where he realises the arpeggiated passages in an absolutely brilliant way, and of his variated reprises in the final Presto (I won’t spoil the trick he pulls at the end).

I am happy to have made the acquaintance of these two sets, and even happier that I am not expected to choose one over the other.