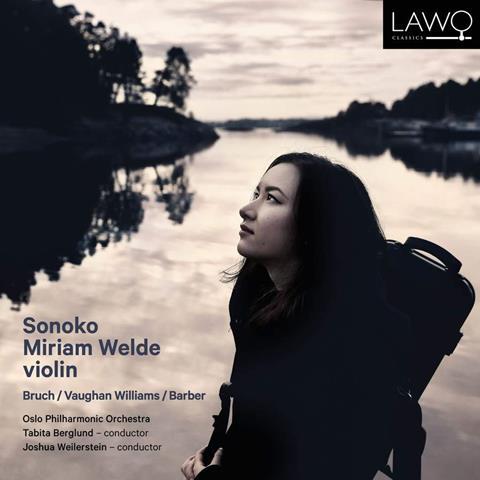 Description: A quality debut that includes perhaps one of the finest Larks you’ll ever hear

Sonoko Miriam Welde’s name reflects this young violinist’s Norwegian/Japanese parentage. Starting as a Suzuki pupil, she has accumulated a string of distinguished teachers. She was 23 and 24 when making this well-recorded debut disc.

It contains one performance of the highest quality. I hear the influence of Vilde Frang, one of her mentors, in the way the notes bubble up, ineffably birdlike, in the outer sections of The Lark Ascending. Welde is one of the few since Hugh Bean to realise fully how vital the double-stops are in creating the pastoral atmosphere. Tabita Berglund and the orchestra are in accord and this is one of the finest Larks I have heard.

The Barber’s first two movements, with Joshua Weilerstein a positive partner, are also beautifully done. The duo sorts out the unsatisfactory finale between them and you will not hear this work much better performed.

After a baleful first solo violin note, the Bruch seems sluggish in the first movement; I keep waiting for something to happen. It finally does in the transition to the second, which is magical, and the main Andante theme is nicely phrased, but in the finale Berglund makes the big orchestral broadening very unspontaneous.

A raspberry to the booklet essayist for calling Albert Spalding, who premiered the Barber, ‘British’: he was as American as blueberry pie.