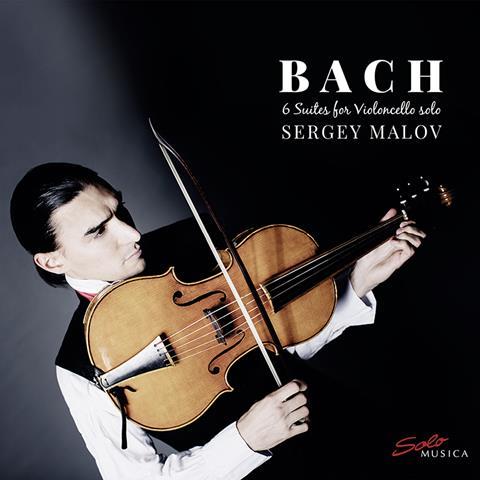 Description: The Bach Suites performed on the ‘shoulder cello’ prove more than just a curiosity

It is known that Johann Sebastian Bach was familiar with the violoncello da spalla, and perhaps even played it himself. Contemporary pictures show the instrument within the orchestra, and several solos from Bach’s cantatas (written into the concertmaster’s part) were almost certainly composed for it. This evidence seems to legitimise a performance of the Cello Suites on this instrument. Sergey Malov recorded three of them for albums released in 2013 and 2017, when they were combined with music by Bartók and Ligeti. Here we have newly recorded versions of all six suites in what has to be the only set of them to require just one CD! This was made possible by the omission of practically all repeats, a practice by which Malov attempts to ‘preserve the clarity of the form… wishing to embrace the entire cycle… as one great story’.

Additionally, many movements flow into each other almost without a break, which underlines their shared harmonic structure and makes them appear almost as variations of one another. Malov’s minuets can occasionally sound impatient, but his embellishments are always spontaneous. With consistently buoyant tempos, the music unobtrusively recalls its origins in dance. Malov – a violinist – has had years of experience handling this rather unwieldy instrument, and it shows: whereas in his previous recordings the odd note could be less then perfectly focused (particularly on the low C string), the instrument’s sound quality is now beautifully equalised. Not least thanks to the generous acoustics, this recording on violoncello da spalla can be enjoyed without any tonal allowances whatsoever when compared with (almost) any others performed on a regular cello.