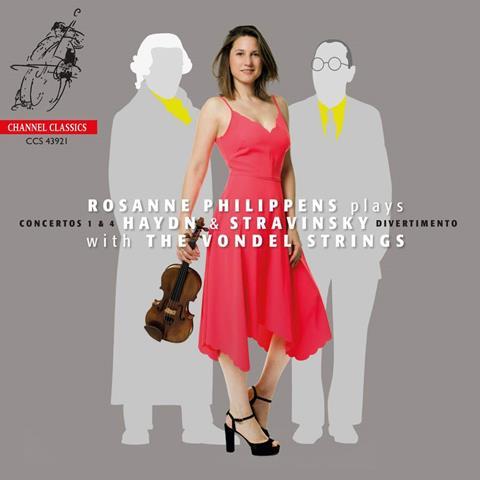 Rosanne Philippens interprets Haydn’s two concertos with innate musicality. Her energetic accounts of their sprightly outer movements are neatly articulated and incorporate some winning rubato, dynamic contrast and humour. Listeners may have reservations, on historical grounds, about the appropriateness of some of her extempore ornamentation, the content and length of the first-movement cadenzas (respectively by Philippens herself and Anner Bylsma) and the relentlessly driven finales – that of the G major work seems more Presto than Allegro. However, she shapes the central adagios with poetry and artistry, especially the C major’s flowing aria, adorned by David Jansen’s conversational harpsichord contribution. The Vondel Strings, many of whom also emanate from Philippens’ ‘stable’, accompany throughout with unanimity and a palpable sense of enjoyment, and Philippens’s 1727 ‘Barrère’ Stradivari, even-toned across its range, blooms in a church recording that combines immediacy, firmly focused yet transparent textures, and an attractive ambient warmth.

Philippens and friends dispatch the sandwich filling, James Ledger’s arrangement of the Divertimento from Stravinsky’s The Fairy’s Kiss, with rhythmic precision and a ready response to the varied moods and atmospherics expressed, particularly in the Sinfonia and Scherzo. The percussive rhythmic material of the Danses Suisses, too, is especially well graded and the Pas de deux concludes with veritable dynamism.