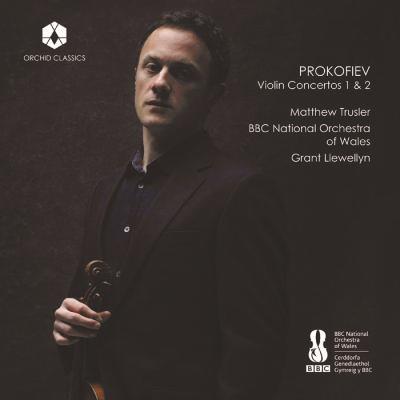 If it’s become fashionable in recent years to miniaturise and prettify the Prokofiev concertos, emphasising their balletic and toyshop qualities, Matthew Trusler embraces and fully stages the high contrasts – sometimes not only from page to page but also from bar to bar – between introversion and extrovert display. Try the episodic central movement of the Second Concerto, where Trusler turns on a sixpence from a baritonal assurance to a silvery soprano. In this he’s aided by an old-fashioned recording balance that places the soloist unabashedly front and centre. He steals into the First Concerto like Juliet over a barely audible carpet of tremolo before brandishing a rapier worthy of Mercutio in the scherzo’s first theme and bringing a braggart’s swagger to the double-stopped octaves.

Neither he nor his orchestral colleagues are afraid of sandpapery or acid tone where appropriate in the sardonic finale to the Second Concerto. Perhaps the tick-tock accompaniment to open the First’s finale is unnecessarily obtrusive; it’s the one movement on the disc that doesn’t quite come together – perhaps not coincidentally, for Prokofiev himself around 1916–17 was still searching for a happy marriage between his own lyric instincts and modernist discoveries. He soon became as adept at designing masks as any Soviet artist, and Trusler wears them in some style.