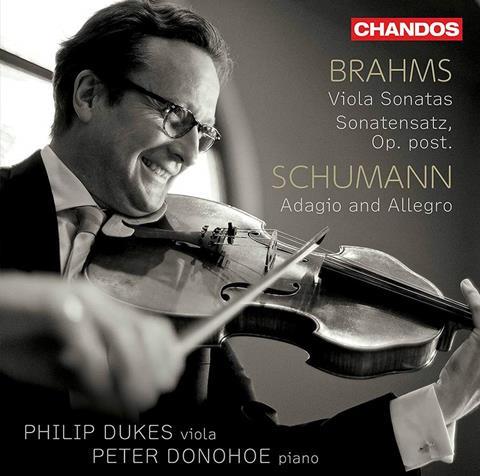 Description: An uncommonly strong partnership shines in core works for viola and piano

The two viola sonatas written by Johannes Brahms towards the end of his life belong to the instrument’s core repertoire but were first conceived for the clarinet. The viola transcription was supervised and approved by Brahms, who, however, wasn’t completely convinced, calling it ungeschickt und unerfreulich (‘awkward and unrewarding’). There is indeed a case for going back to the original versions of several passages, thus avoiding the tweaking of melodic lines caused by transpositions that were evidently intended to spare violists from staying in high positions for too long. Many eminent players nevertheless prefer the revised version, as Philip Dukes does in the present recording, but a few passages in the first movements of both works fail to sound convincing.

Dukes commands a warmly attractive sound and a wide variety of vibrato but occasionally indulges in ungainly slides that disturb the line. On his 1989 Hiroshi Iizuka instrument, he brings forth some sonorous double-stops while achieving breathtaking pianissimos elsewhere (a passing misreading in Brahms’s Sonatensatz is more than made up for by his sensitive phrasing of the central section). In the main section of Schumann’s Adagio and Allegro, Dukes’s crisp articulation convincingly impersonates the French horn for which the piece was originally written. Schumann’s marking, mit innigem Ausdruck (‘with intimate expression’) at the start is beautifully realised by Dukes and Peter Donohoe, who is an uncommonly strong partner throughout the recital and has an attentive ear for inner voices in the intricate piano parts.