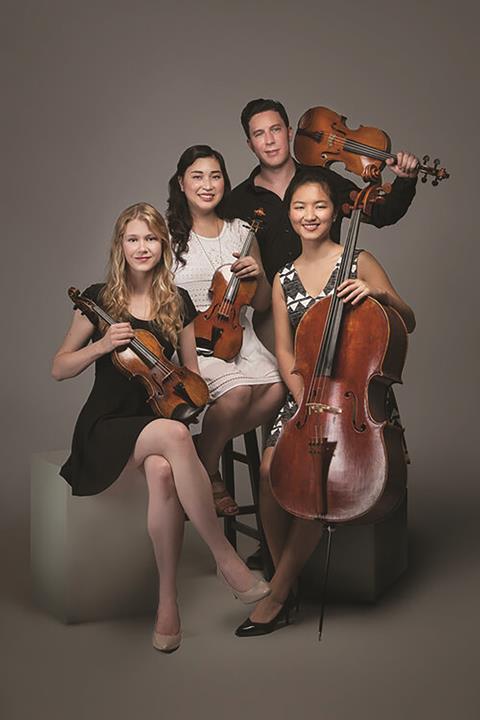 This Ulysses Quartet evening was originally planned to take place at the Juilliard School, but in a ‘can’t stop us’ manoeuvre, the ensemble relocated to violinist Tina Bouey’s apartment for two recent works by composer Joseph Summer, and live-streamed the concert via Facebook and YouTube.

Of Summer’s two ‘Sea Change’ quartets (both from 2020 and inspired by deep-sea diving in Asia), no.1, I to the world am like a drop of water, is in three movements. The first, a densely populated view of the ocean’s wildlife, sports a very long title starting with ‘Picasso Trigger’, a reference to an unusually coloured fish of that name. The second movement, ‘I can call spirits from the vasty deep’, was more ruminative, flecked with sparkling harmonics, before a gutsy series of chords heralds the end. And the finale, evoking ‘A thousand golden Buddhas, a thousand silver barracudas’, filled the room as if with tiny virtual fish, frenzied and fleeting.

For the second quartet, unpath’d waters, undream’d shores, a lyrical violin line floats over a chorale-like figure, leading to a regal, subdued mood. The players caught the rhapsodic, florid ebb and flow. The second movement has enticing pentatonic scraps, as if seen from behind a veil, leading to an abrupt finish.

Pizzicato opens the finale, as the first violin unfurls fluid lines over the others. Rugged double-stops eventually flood in, as the rich, dense textures surge and retreat. ‘Epic’ might be hyperbole, but at around 40 minutes each, the two quartets perhaps deserve it. As a sprightly encore came ‘Song of the Little Partridge’, based on an Armenian folk song.

Given the circumstances, Michael Sinicropi deserves a nod, as the evening’s intrepid sound and video engineer. Even with sonic limitations, the ensemble’s tone was transmitted with balance and heft – no small feat. And the format provided an added feature: fans listening around the world could weigh in with emojis – floods of hearts floating up gently on screen – or make comments, to wit: ‘Aunt Connie is watching from Newark, Delaware!’