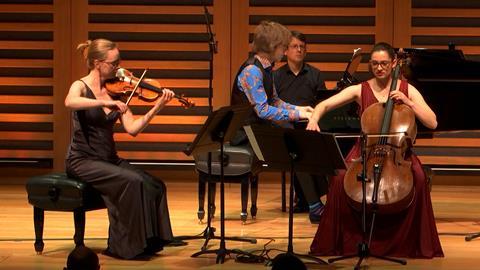 There must have been many a delayed premiere in the last year or so. Brian Elias’s Piano Trio was due several months back, but didn’t make it before an audience until the end of May. It is a work in five linked movements, with Haydn, says the composer, an inspiration in the background. The opening Allegro is a ‘call to attention’, with fervent, rhetorical strings to the fore, which darkens before leading into a Lento, the first of two slow movements, with long weaving melodies, which drew sustained lyrical playing even as the lines swooped and dipped, with curlicues of ornament and occasional double-stopping. There was great tonal intensity in the (I think) trio of the central Presto, and it was all rounded off with a second Presto. This is an energetic and entertaining work with a wide emotional range, which brought fine playing from the Rautio Trio.

In Schubert’s E flat major Trio they were forthright and exuberant, with springing rhythms in the first movement. In the opening of the Andante, cellist Victoria Simonsen was both simple and wonderfully expressive, and they carried the narrative line through the long movement with expressive intensity. There was charm in the Scherzo, and the final Allegro Moderato emerged from dignified dance into energetic drama.