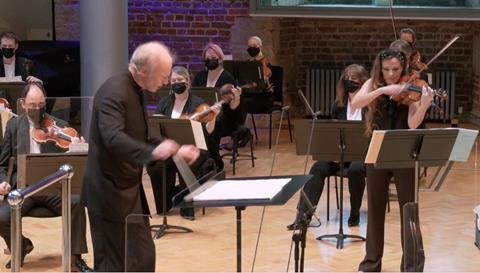 ‘Everything has been poured into it’, says Nicola Benedetti of Mark Simpson’s Violin Concerto. In his own introduction to this studio concert the composer talks promisingly of a B flat minor Lamentoso beginning which makes Gianandrea Noseda’s no-holds-barred direction of Tchaikovsky’s ‘Pathétique’ Symphony a well-chosen foil. But back to the concerto, and what a piece it is: immediately arresting from the wire-brushed gong and bluesy trumpets punctuating a soaring solo cantilena, harmonically legible and charged with passion.

In 35 minutes and five movements, in a shrewdly plotted continuous whole, Simpson renews rather than rejects the tropes of the Romantic concerto from Mendelssohn to Shostakovich. The tensions of the solo writing sometimes find their release in rather obvious moments and brass writing out of the Korngold-to-Desplat cinematic playbook, and the alternating episodes of communing recitative and furious dance in the second and fifth movements withhold resolution longer than feels inevitable.

However, they counterbalance the interrupted love song at the concerto’s heart, and Benedetti’s playing holds the structure together with fierce conviction. Her qualities as an exceptional Szymanowski violinist – fantasy, French-accented tone and fleet negotiation of cross-string fireworks – are celebrated by Simpson’s writing, but I fancy other modern virtuosos will be queueing up to place their own stamp on a concerto that has every ingredient for popular success and a place in the repertoire.