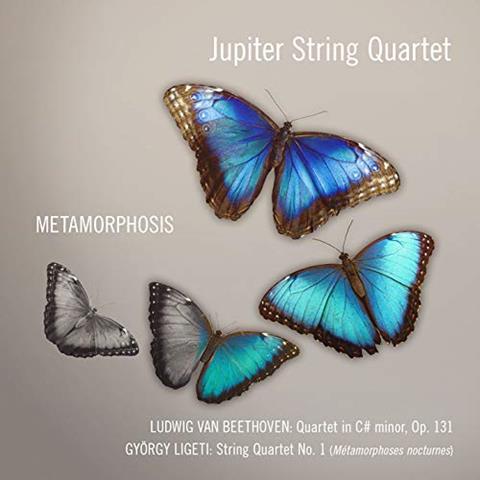 Description: Intensity of approach is bewitching in Ligeti but takes Beethoven to the edge

Beethoven and Ligeti make for a provocative pairing in this ambitious disc from the Boston-based Jupiter Quartet – though it’s only a partially successful one. In Ligeti’s Bartók-on-acid First Quartet, the Jupiter players are simply superb: theatrical, full of dark humour, alive to the composer’s switchback flips of style. And they achieve it all with an unerring fidelity to the letter of the score, peering through the work’s abundant grotesqueries and bizarre sonic inventiveness to Ligeti’s meanings – sometimes sinister, sometimes playful – underneath. It’s a joy from start to finish, and often bewitching in its uncanny beauty.

From the rather over-emphatic sforzandos in the opening solo lines of Beethoven’s op.131, however, the Jupiter’s account of that quartet feels somewhat hard-won and effortful, as though self-consciously tackling an Everest of the repertoire rather than approaching the work with the same directness the players employed with the Ligeti. There’s beautifully nuanced playing nonetheless – their characterisations of the fourth movement’s variations are particularly enjoyable – but a harshness to the quartet’s sound begins in the extremely quick fifth-movement scherzo and reaches a climax in the finale, pushed punishingly hard, and astonishingly raw and strident. The intensity is undeniable, but it doesn’t make for easy – nor particularly pleasurable – listening, although the close, detailed recorded sound captures the account with unflinching honesty.