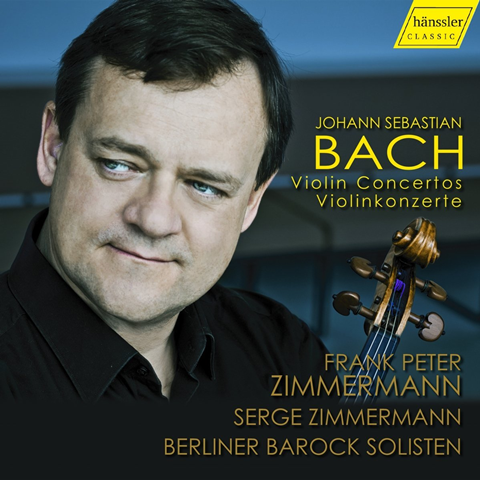 In this disc of four Bach concertos Frank Peter Zimmermann performs the composer’s two surviving solo violin concertos, a reconstruction for violin of the D minor Concerto (BWV1052, better known in its later form as a harpsichord concerto) and an arrangement for two violins of the BWV1060 Concerto for two harpsichords, or for violin and oboe. In this last, Zimmermann is partnered by his son, Serge.

Zimmermann père has recently been reunited with the ‘Lady Inchiquin’ Strad, and it’s an instrument whose entire range he is able to imbue with the same lucid, balanced tonal quality. There is a sweetness to the high-flying lyricism in the slow movement of BWV1042, where Zimmermann floats the solo line, vibratoless, over the orchestra, lending the movement an almost other-worldly colouring. In the following Allegro assai finale he brings a deftness of touch and a lightly sprung, dance-like lilt; however, the finale of BWV1052R is more outwardly breathtaking, with its breakneck multiple-stopping and string-crossing.

Father and son appear well matched in BWV1060R, especially in the slow movement, where one violin’s line emerges repeatedly out of the other. The recording delivers tingling clarity within the contrapuntal writing, highlighting the dynamic playing of the (non-period-instrument) Berlin Baroque Soloists.