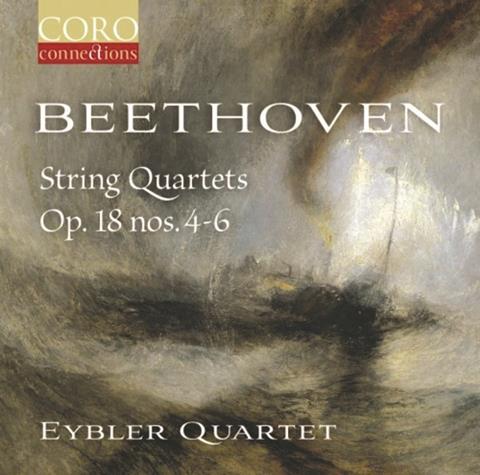 The Eybler Quartet launches into the second half of op.18 with the same high-tensile energy and deftly articulated precision (captured in imposingly tactile sound) that marked its first release in the series (Coro 16164). The opening movement of the Sturm und Drang C minor Quartet inflicts every musical body-blow with a terrifying, rapier-like thrust. The following Andante is likewise sounded with restless, probing introspection before the Menuetto storms away with a headlong urgency that thrusts aside the gentility of the late-18th-century ballroom.

Most quartet ensembles create a smiling sense of radiant cantabile as Beethoven launches the fifth in the series with one of his most carefree melodies. The problem is that the composer promptly turns his back on it with a game of thematic ping-pong, intended to dispel quickly any sense of allure. By keeping that magical opening free of succulent vibrato, the Eyblers integrate Beethoven’s sudden change of creative direction without a sense of stubbing one’s musical toes. With its occasional Mozart-in-Beethovenian-overdrive invention, the last of the op.18 quartets is in many ways the trickiest of the series, yet by giving the composer’s creative zeal its full head – especially in the exhilarating opening Allegro, which is truly con brio – the Eyblers bat away any potential difficulties with exuberant élan.