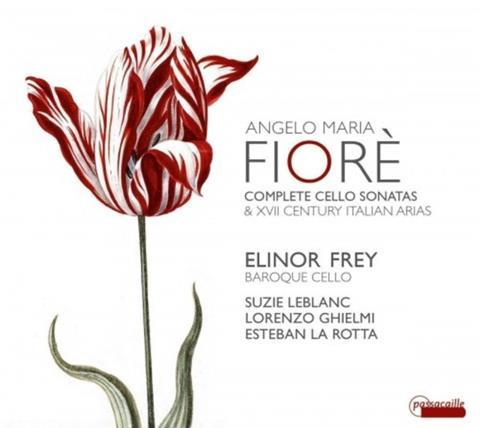 Towards the end of the 17th century, northern Italian composers were busy freeing the violoncello from its bass-line chores by creating a soloistic repertoire for it. Domenico Gabrielli is perhaps the best known of them, but this CD puts the spotlight on his younger colleague Angelo Maria Fiorè, born c.1660, probably in or near Milan, who worked in Lombardy and Emilia before settling in Turin, where he remained until his death in 1723.

Fiorè’s continuo-accompanied pieces are variously titled ‘sonatas’, ‘sinfonia’ or, charmingly, ‘trattenimenti’ (entertainments). They are all around five or six minutes in length and most of their short movements correspond to the usual dances of the age (though they might not be named thus). They are realised by Elinor Frey and her continuo collaborators with a keen ear for rubato and rhythmic inequality that doesn’t preclude an exciting momentum in the concluding, gigue-styled sections.

Alternating with Fiorè’s compositions are arias from contemporary operas that include an obbligato cello part. Voice and instrument complement each other, either through imitation or contrast, in music that makes the most expressive use of the rhetorical means that were a lingua franca in Baroque word-setting. Suzie LeBlanc’s clear voice contrasts beautifully with Frey’s tone, both being equally agile and expressive. The recording, made in a Lombard church, places the musicians in a warm, enveloping acoustic. Frey’s notes – a model of erudition lightly worn – add greatly to the CD’s value.