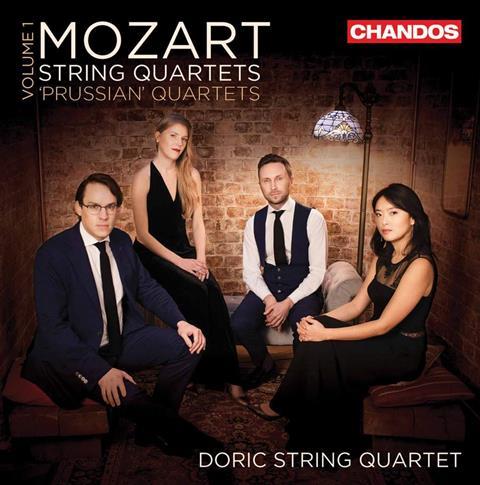 The opening Allegretto of Mozart’s D major Quartet sets the template for all the playing on these discs, warm and gemütlich, rhythmically tight and flowing. The genial passing of melody in the Andante is a delight, simply but subtly shaped. The Menuetto kicks into vigorous life, the sudden changes of dynamic done with dramatic intensity, and the beautifully paced finale shifts easily from sunny musing to energetic rhetoric.

They start the B flat major Quartet almost as if feeling their way, before landing with satisfying firmness on the first forte of the work and setting off with compelling ardour. They make much of the contrasts between light and shade (the F minor opening of the development is a fierce blast). Cellist John Myerscough is eloquent in the solos Mozart provided for King Friedrich Wilhelm II of Prussia, the amateur cellist who commissioned this set, and does him proud once more with the melody which opens the Larghetto. Leader Alex Redington treats his semiquaver passage later in the movement with eloquent rhythmic freedom, which is apparent again as the trio of the third movement threatens to go exploring in remote keys, and in the finale when the headlong triplets give way to quiet uncertainty.

Strong contrasts, of character as well as dynamic, are a feature of the F major Quartet as well, as where the soft, curious snatches of dialogue at the start of the first-movement development are swept away by the bright and forceful imitative passage which follows. There is airy conviviality in the Andante and humour in the Menuetto. The semiquaver runs of the finale seem to slither along before the outbreaks of brilliant drama. The recorded sound is warm and clear.