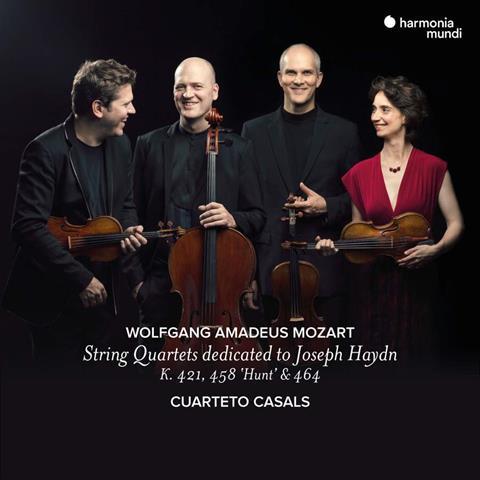 Cuarteto Casals’s survey of Mozart’s ‘Haydn’ Quartets (vol.1 was reviewed in November 2014) is brought to a fine conclusion with this captivating release. Internal balance is exemplary, with each player having their own distinctive voice, caught to perfection by the fine-detailed yet plushly upholstered sound picture from engineers Martin Sauer and Tobias Lehmann. Vibrato is used sparingly and with exquisite taste, ensemble is precise – more instinctively ‘felt’ than well-drilled – intonation is well-nigh flawless, and there is tonal equality throughout the range, without any sense of top or bottom domination. Above all this remarkable group plays with a sensitivity of phrase, dynamic and texture that sets new standards in this much-recorded repertoire.

The sense of experiencing this music with a fresh pair of ears is strikingly present from the opening bars of the D minor K421, which emerge free of hyper-vibratoed hysteria; the sense of tragedy unfolding is tantalisingly implicit rather than writ large. Likewise, in the emotionally supercharged opening of the third movement menuetto, sheer physical heft is transmuted into a poignant distillation of the music’s very essence. The ‘Hunt’ Quartet’s outer-movement dancing is kept light as air and en pointe, entirely free of ambling rusticity, while K464 captures the gentle bonhomie familiar from other Mozart A major classics such at the K488 Piano Concerto and K581 Clarinet Quintet. A superlative disc.