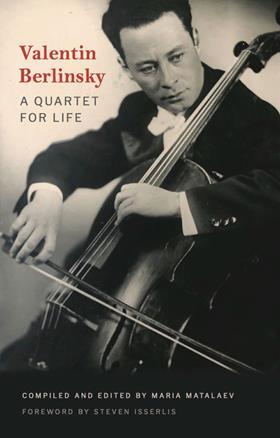 Books about quartets do not come along very often and they vary widely in quality. This one about the Borodin Quartet has its drawbacks, partly because the cellist Valentin Berlinsky (1925–2008) did not live to see it published, and partly because he presents a partisan view of events. As I had a number of chats with him over the years, I was conversant with his highly subjective point of view, but others are advised to keep a salt cellar handy as they read.

The problems begin with the very foundation of what became first the Moscow Philharmonic Quartet and then, in 1955, the Borodin Quartet. Berlinsky was always at pains to claim that he was the original cellist, whereas it was Rostropovich – he said he was in the group for some time, Berlinsky claimed it was two weeks. The great violist Rudolf Barshai also featured strongly in getting the quartet off the ground, but in this book Berlinsky goes out of his way to rubbish Barshai at every turn.

His observations on Shostakovich are of great interest, but he always overplayed the group’s connection with the composer, especially after Barshai’s departure. Marketed in the West as the interpreters par excellence, the Borodin players introduced many of their own mannerisms, foreign to what Shostakovich wanted.

The chapter on Sviatoslav Richter is fascinating, as he was the quartet’s favoured guest pianist. It is nice to have Berlinsky’s thoughts on David Oistrakh, on Rostropovich, on teaching and on trying to make a career in the nightmare of the Soviet Union. Once we get to 1955 he is pretty accurate on the Borodin’s career and personnel changes. He is even candid about a bust-up with the second leader, Mikhail Kopelman.

The pen portraits of the quartet’s teachers and mentors, the day-to-day struggles, the touring, the rehearsals, the ‘constitutions’ that the Borodin drew up in order to achieve smooth running of their affairs – all of these things will interest the general reader. The interviews with Berlinsky himself and the group’s long-time violist Dmitri Shebalin are in that weird stilted language familiar to us from similar talks with other Soviet artists, but some things do come through the carefully guarded Sovietspeak. The interview with the cellist’s daughter, the pianist Ludmila Berlinskaya, is more straightforward and very touching.

As the text went through a number of hands, not including the English translator, a few strange ‘facts’ about other quartets have crept in, for instance that the Smetana Quartet had a repertoire of just twelve works, and that Oistrakh’s ensemble made just two recordings (I have about half a dozen). The various lists will be very helpful to music historians and enthusiasts, especially ‘Memorable Concerts’ and the Borodin’s repertoire. The book is attractively produced although the pictures are grainy.