Andrew Dipper delves into a new translation of the 19th-century treatise by John Saucier, W. Brad Holley and Kate Rickenbacker 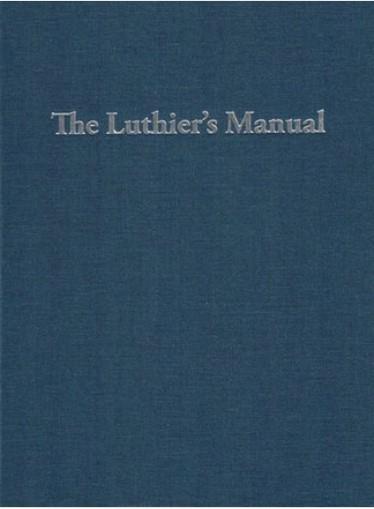 The Luthier’s Manual by J.C. Maugin

This neatly bound book, Smythe-sewn in folio and adhesive bound in hard cloth cover, has on its title page a copy of the woodcut, copied from the original publication of 1834. It pictures a violin maker and his client in a luthier’s workshop, engraved by Godard from a drawing by Tellier. In addition, there are numerous line illustrations reproduced from a fold out plate in the original publication of 1834, making 280 pages in all. It is the result of a collaboration of editing and translation from the French original by three authors, John Saucier, W. Brad Holley and Kate Rickenbacker. John Saucier’s work as a luthier is influenced by the guitar making tradition of the famous 19th century Spanish guitar maker Antonio Torres. Kate Rickenbacker is a graduate of the Chicago School of Violin Making, and W. Brad Holley is an associate professor at Georgia Southern University. His research focuses on 19th-century literature, and he hold a masters in French and a PhD at the University of Alabama where he researched the 19th-century French author Paul Féval.

The original French edition of The Luthiers Manual of 1834 by Jean Claude Maugin was published by Nicolas-Edme Roret under the series title of ‘Librairie de Roret’, –later referred to as Encyclopédie-Roret and Manuels-Roret. The original book measures only a tiny 4x6 inches with 224 pages and was printed in the city of Troyes, southeast of Paris by the famous Imprimerie de Cardon. The various sections detail the method of construction and other aspects of instruments of the violin family, the guitar and bows. The book was a success in France and went on to achieve two 19th-century editions that were enlarged and corrected by W. Maigne. The first French edition credits and borrows in its pages from the older publications of August Otto and Antonio Bagatella. It concerns itself not just with workshop practices of the early 1800s, but also details the choice and selection of woods, tools, glue, and finishes including varnish. It is interesting that it was published six years after Gustav Adolph Wettengel’s Vollständiges Lehrbuch der Geigen- und Bogenmacherkunst, a German-language book with similar aims, details, and illustrations. Both books are fascinating in their outline of the economic and cultural diversities in the arts of musical instrument making from the various countries of Europe in the early 1800s.

The English edition of Manuel du Luthier is a welcome addition to the small number of translated historic workshop manuals and it enables the English language reader to appreciate the complexity and diversity that existed in the European workshops of the early 1800s before the trade had become polarised between the French and Italian methods of violin making with their respective external or internal moulds.

The book has a table of contents, preface, explanation of the format, explanation of the units of measure and their translation into centimeters, woods used in construction, dyes, and finishes and diagrams based on Antonio Bagatella’s 18th-century exposition on the design of the violins of the Brothers Amati. all carefully and usefully arranged with a parallel French and English format that allows the reader to check nuances of the original language. The illustrative plates of the original have been reproduced and inserted in their correct position in the text and this facilitates readers’ understanding of the text. The sections of the book are divided as follows:

Figure 20, an illustration of a thumb plane is truncated by a fold in the paper of the original and many of the plates suffer from the 18th-century malaise of wrong proportions and inadequacy that some modernisation might have prevented. In some places the literal translation of the French rendered the English unpleasant and difficult to read for instance on page 43 ‘ne torment pas’ translated as, ‘so that it isn’t disturbed’ might have read ‘so that it does not warp’, which is much clearer and in my experience with the process, would be more correct. In some places in the text of the violin chapter vague guesses have been given concerning the translation of materials. Here a little research might have clarified terminology. For instance, on page 131 ‘molette de verre’ should have been translated as ‘a glass muller’ rather than a glass wheel, and on page 139 in the varnish chapter ‘sang dragon en roseau’ should have been footnoted because it refers to a particular type of dragon’s blood resin of pharmaceutical quality whose manufacture should have been detailed since it makes a big difference in the tinting power of the ingredient. It should be noted also that Turmeric which is mentioned as a yellow dye when used as a varnish ingredient must be sourced correctly, or the common variety yields a color that can be a sickly greenish yellow, instead of the required yellow orange.

In general, there are many parts of the translation that should have been accompanied by footnotes or end notes. This might have been judged essential especially in places where the details of construction differ from historic examples. In this respect I was annoyed by the translation of refendre that resulted in the English word ‘split’ when it arguably might have been translated as ‘parted’ Or, ‘parted with a saw’. Errors in the original French detailing the placement of the bass bar gave me cause for concern about other details in the text and similarly the reference to Rutgeri instead of Rugeri and Alvani instead of Albani on page 175 did not reflect well on the editors, these original errors had no correcting notes in the translation. In the bow making section on page 255 ‘Give the slide the shape of the letter X’ is an incorrect translation of the French ‘donner a la coulisse la forme qu’a la figure n.61 a la lettre x’. and should read ‘give the underslide the form shown on figure 61 indicated by the letter x’.

In some instances, the order of construction seems confused as though Maugin was a mere observer rather than a trained violin maker. On a historical note, it is interesting to read about the separation of trades on page 259, perhaps a left-over from the guild arrangements of the Ancien Régime, which in its turn suggest that Maugin the original author was speaking of bow making, not in Paris but in the provinces, perhaps Troyes, where the book was printed by the socialist printer Louis, Charles Cardon. In 1835 the instrument maker Alexis Villaume had a workshop for guitar and violin making in Troyes and his guitar of that year bears a great resemblance to the guitar of the Maugin treatise. Certainly there are some details in the sections on the bow, and in the section on the violin that further suggest provincial practice, in particular the making of the eyelet of the bow frog’s adjuster with a method that I have seen on 19th-century, provincial bows of ordinary quality.

To back up this supposition of authorship François-Joseph Fétis, in his Biographie universelle des musiciens (1880) under the heading, Maugin, states that he was unable to uncover the identity of Jean Claude Maugin and could find no trace of anyone by that name in the musical trade, other than a mention of a Parisian violinist of little note in the Agenda Musicale of 1838. I also have made a close search of all the literature and can find no one in the music trade by that exact name. It is possible therefore that J.C..Maugin was a pseudonym or perhaps a mere copyright initiative.

I imagine that this new English translation was intended for professionals. The methods of making in all the sections are complex, and a potential source of a minefield of errors for the amateur. One must remember that being antique does not make the original book pertinent or correct, but these early publications are all interesting and worthy of further study. I found many parts enlightening and especially enjoyed the section on guitar making, which, being less prone to trade secrets is subject to fewer errors than the section on violin making. Laying a veneer around the neck core of a romantic model guitar is no small feat and the description of this process in the translation is detailed and workable. All the authors should be congratulated on having progressed the project through to its end, but I am sure that carrying on the business of instrument making and authorship at the same time, will never allow sufficient time to make a book that is completely error free, and they should be congratulated for having the temerity to attempt it in the first place. Well done!