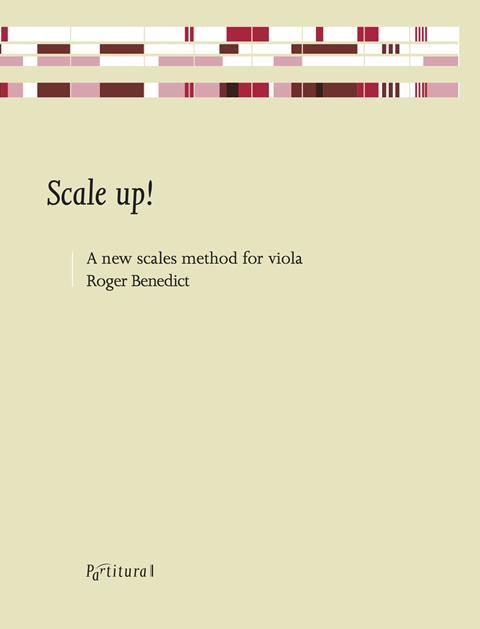 Scale Up! A new scales method for viola

In his introduction Roger Benedict sets out his reason for producing a dedicated scale volume for viola; that up till now there has been very little published methodology specifically for the instrument. Most violists have used transcriptions of the revered violin systems set out by Flesch and/or Galamian to aid their practice of scales. On the surface, this volume looks rather similar to those two. The scales and arpeggios are set out in order, go through each key in turn and, as in the earlier violin books, establish a routine of skills and techniques. Benedict deploys an impressive 19 different skills which, of course, allow a practitioner to dip in and out of each routine as required. He also makes persuasive arguments that fingerings suited to violinists do not always work for the larger viola.

He suggests starting on the first finger for three-octave scales up to G flat, which ‘allows the first octave… to be played within an octave hand frame’. He has also decided to omit harmonic minor scales. His very sensible explanation for this decision is that when the awkward augmented interval is found in repertoire, it often needs to be fingered in different ways depending on context. He also suggests more shifting for double-stops, rather than using conventional violinistic finger substitutions, which can cause unnecessary and tiring tension when attempted on a larger instrument.

The real success of this scale volume is the consistent musicality of Benedict’s approach. He calls on his years of experience as an orchestral violist, and as a chamber musician, to urge the player always to think of intonation in their scale practice. He describes simply and expertly the science of Pythagorean proportions, equal temperament, and how and why to use or avoid expressive or melodic intonation. He prints harmonies under the scales to give musical context and direction, and suggests using a tuner to act as a drone, so that practice can be done with reference to intervals rather than merely travelling note to note. It might help to create an accompanying set of tracks for these, so practitioners can work in this way more easily, without having to record themselves in advance.

Benedict set out to produce something specifically useful for a violist. It is clear to me that he has achieved more than this. As a player of both the violin and viola, I can see enormous benefits for all upper string players. Violists will love the care Benedict has taken to produce something bespoke for the larger instrument, and violinists can use their own traditional scale fingerings while working within his harmonic framework. As the great violinist Lydia Mordkovitch once said (rather forcefully): ‘Scales can be musical too!’ This new volume will inspire and provoke the process to achieve that result.