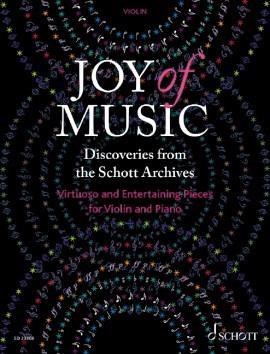 Joy of Music: Discoveries from the Schott Archives

I spent a rather enjoyable rainy afternoon during lockdown roaming through this collection of archival material. It felt like a throwback to the world of endless encores and party pieces, and my feeling is that exam boards will adore this book, as it contains material for higher-grade students that will be unfamiliar but playable, and largely appealing.

Technically the level is probably ABRSM Grade 6 upwards. Many of the pieces explore the higher positions on the lower strings and, apart from Hubay’s Plaintes arabes, a Gigue by Wieniawski and Léonard’s Capricho espagñol, there is little in the way of double-stopping, although plenty of showy but playable cadenza-type material throughout.

The idea of the publication (and others in the series for different instruments – piano, flute, cello and clarinet) is to celebrate the 250th anniversary of Schott in 2020 with less familiar examples of repertoire by relatively familiar composers. Most are from the Romantic period, and the violin is put through its paces by composers who knew what they were doing. So we have examples by violinist–composers such as Pugnani (a real piece by him, not a Kreisler ‘classical manuscript’ and here arranged by Alfred Moffat), Wieniawski and Beriot; and compositions originally by composers less known for their string writing where the arranger is everything, such as Chopin (arr. Friedrich Hermann), John Field (arr. Emil Kross), Gounod (arr. Adolphe Herman) and Anton Rubinstein (arr. Gustave Sandré). Berthold Tours’ Fantasy on Hänsel und Gretel (Humperdinck) and Bizet’s Carmen March arranged by Reinhardt bring us familiar tunes in the style of the period.

Of particular interest are nuggets by Jean-Delphin Alard, whose 1852 Barcarolle shows violinistic writing in a fluid 6/8 piece with plenty of expressive detail, and Léonard’s aforementioned Capricho espagñol – which has moments of real virtuoso passagework as well as sextuplets of 3rds and 6ths over the fingerboard.

At the end of the piano part is detailed background information on the repertoire and its composers and arrangers. This is an interesting publication, and a delightful addition to unfamiliar but showy material of a particular age. Playing through it was an immersive experience, bringing the 19th century to life. Inevitably these are examples of forgotten repertoire, but they evoke a former age and deserve exposure, rather like looking at a sepia photograph for clues to the past. How much more little-known music there must be in the archives.