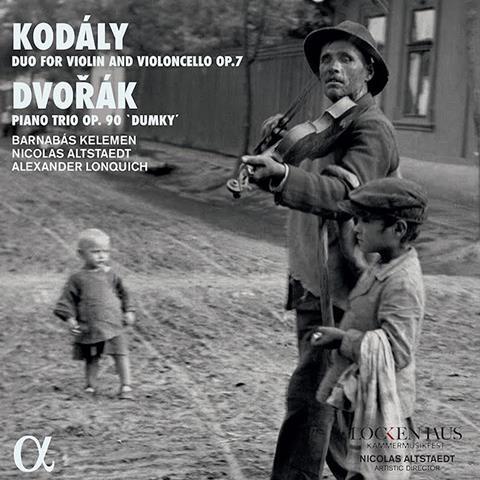 From the searingly intense opening to the Kodály Duo you are plunged headlong into a dazzling sound word, by turns exquisitely soft and then ragingly loud and powerful. Supported by an outstandingly vivid recording derived from the 2021 Lockenhaus Festival, these artists deliver a rollercoaster performance, yet their conception of nuance is infinitesimally subtle. The Kodály teems with ‘micro-rubato’ gestures, the smallest tempo fluctuation yielding phrases that here sound spontaneous and almost improvised. Both performers not only empathise with the traditional folk roots in this music, but also master the numerous tempo changes within each movement with compelling control of the musical narrative and phenomenal ensemble.

The ‘Dumky’ Trio is equally mesmerising, with Alexander Lonquich’s piano timbre bursting with colour and astonishing timbral variety. As in the Kodály the almost constant tempo changes in each movement are projected with great assurance and consummate phrasing so artfully expressive yet eschewing any hint of mannerism.

An added bonus is the performance of a sketch for the third of the ‘Dumky’ Trio movements. The experience of hearing this version, which mixes material that is familiar in the final version with completely different ideas that Dvořák ultimately rejected, is a bit like seeing a familiar friend momentarily through a mist, particularly as the music stops exactly where the sketch does without resolution. This is a spectacular release in every regard.