Augusta and Georgina McKay Lodge: Chamber Music from the Court of Frederick the Great

Exuberant playing of virtuoso works fit for a music-loving king 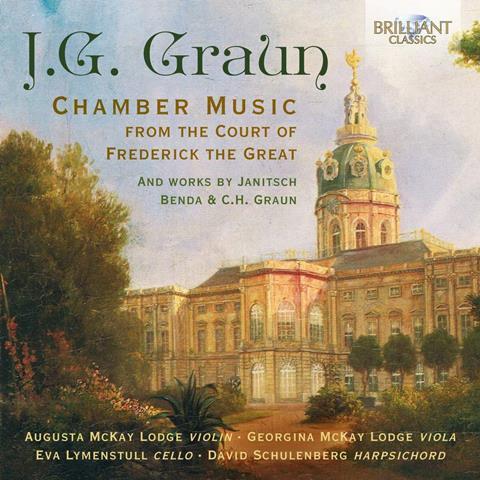 The Prussian King Frederick II (known as ‘the Great’) was a proficient flautist and his court was a magnet for the musicians of his time. Someone in Frederick’s orchestra must have played the viola to an uncommonly high standard, judging from the numerous pieces that were composed in Berlin at a time when the solo literature for the instrument was still in its earliest stages. Johann Gottlieb Graun’s Sonata in C minor (elsewhere attributed to Wilhelm Friedemann Bach, who may have had a hand in shaping the exuberant keyboard parts of this and Graun’s Violin Sonata) includes several virtuoso passages, idiomatically laid out. Graun achieves great expressive intensity with some tormented chromatic writing and formal experiments: the Violin Sonata’s final movement is twice interrupted by slow interludes. Contrastingly, Graun’s A major Trio for violin, viola and continuo is of a more lyrical, carefree hue.

All the pieces included in this most welcome recital are written in the three-movement scheme (slow–fast–fast but dance-like) and in the empfindsamer Stil (sensitive style) in vogue in Berlin at the time. These players have obviously made a close study of this repertoire’s specific interpretative arsenal, as handed down in treatises by Johann Joachim Quantz – the King’s teacher – and C.P.E. Bach. The intricate embellishments flow elegantly, cadenzas evolving seamlessly and unanimously phrased. The strings are beautifully contrasted in timbre, faithfully caught by the lifelike recording and nicely balanced with the harpsichord.