Attacca Quartet: Of All Joys 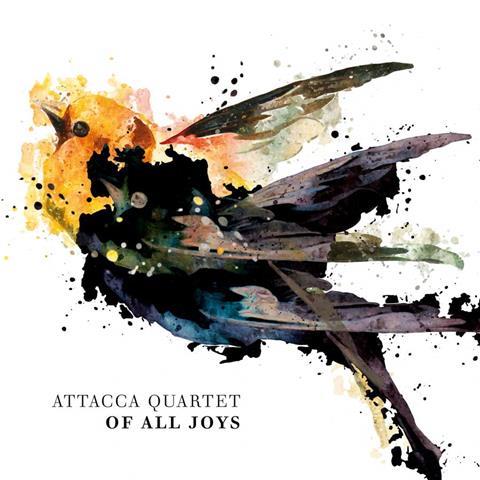 Description: There’s joy to be found in this collection of sombre and thoughtful works

Three 20th-century minimalist compositions frame two groups of three short Renaissance works in this unusual programme. The centrepiece, Glass’s Third Quartet, comprises six movements from his music for Paul Schrader’s film about the Japanese novelist Yukio Mishima. The Attacca enliven Glass’s patchwork score, particularly in the motoric fourth movement and the ensuing ‘Blood Oath’ of Mishima’s Samurai allegiance before his honourable suicide. Beginning and ending with atmospheric arrangements of liturgically based works by Pärt, they give expressive shape to the restless interplay of repeated motifs in his tintinnabulian Summa and his ascetic, plainchant-inspired Fratres. Vibrato is strikingly suppressed in this clear and immediate recording.

The Renaissance pieces offer rich harmonic contrast to the sparse minimalist sound world. Some trace the madrigal’s lineage from Marenzio’s Solo e pensoso through Bennet’s Weep, O mine eyes to Dowland’s similarly introspective Flow my tears, all sensitively delivered. The complex polyphony of Clemens non Papa’s Ego flos campi and Gibbons’ D minor Fantasia à 6 is winningly realised, but violinist Amy Schroeder’s introduction of slides in Allegri’s Miserere is arguably a miscalculation. Although this album’s musical content is hardly a bundle ‘of all joys’, these performers’ interpretations, in which shapes and colours continually grow and change, are thought-provoking.