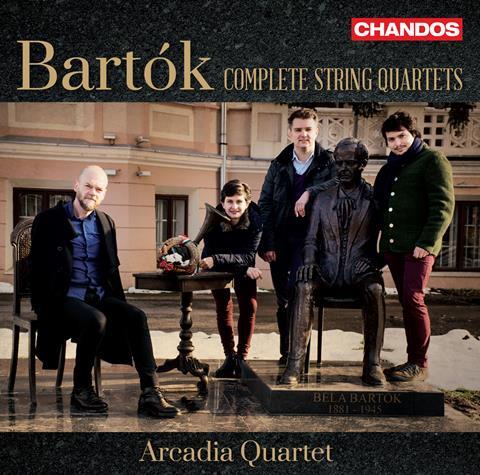 You don’t need to see the booklet photos of this Romanian ensemble at Bartók’s birthplace to appreciate that its members have his music in their blood and under their fingers. The affinity that they proclaim in a separate introduction manifests itself in unpredictable ways: perhaps the residents of Transylvania feel no need to play up or ironise the folk rhythms and melodies that are their rightful heritage.

So even in the most strenuous pages of Quartets nos 3–5 there’s not a rough stroke or gritty note, any more than there is on the classic DG set with the Hungarian Quartet. There’s no lack of twisted, culminatory force to the Third’s recapitulation or abandon to the Scherzo of the Second – which strides and lurches with the dead-eye determination of a man on a mission to get roaring drunk – but the Arcadia integrates them within a central-European family of idioms.

The spirit of Dvořák’s furiants is not so far away in time or place, the hectic introversion of Janáček even closer. In Bartók’s infinite varieties of unison (and the naughty quarter-tones of the Sixth’s Burlesque) it’s an overwhelming relief to encounter playing of such assured finesse, captured by the Chandos engineers with appropriately convivial resonance.

It’s generous playing in every way, from the broad unfolding of the First’s Beethovenian argument to the compassion and patience warming the grave outer panels of the Sixth. The masks of these often-elusive works melt away in the hands of the Arcadia.