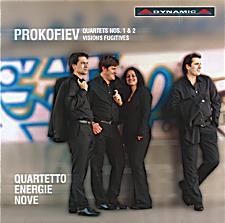 Prokofiev’s quartets have tended to remain on the outer fringes of the central performing repertoire: a consequence of his wide-ranging stylistic terms of reference, dazzlingly hyperactive changes of musical direction and intimidating pyrotechnical demands. All of which makes these engrossing accounts from the Energie Nove Quartet – a young ensemble composed of four competition-winning players who are currently section principals with the Orchestra della Svizzera Italiana – particularly welcome. Throughout even the thorniest passages they retain absolute technical composure, knife-edge ensemble and remarkable intonational accuracy.

If the general tendency in this music is to play cool with the music’s essentially neo-Classical profile, the Energie Nove players throw themselves gleefully into the fray, clearly believing in every note. Relishing the music’s bracing inventiveness and chameleon-like changes of mood, they play with an electrifying frisson that provides a vital musical bridge between the impassioned middle-period masterpieces of Tchaikovsky and Shostakovich’s agonising introspection. Music that often appears to lack a strong sense of structural cohesion feels utterly compelling and inevitable here.