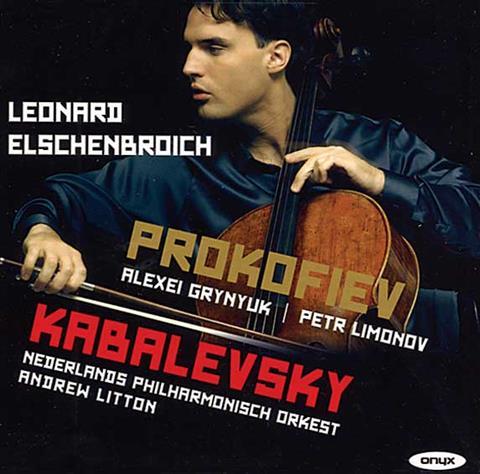 Leonard Elschenbroich and Alexei Grynyuk, whose 2013 debut recording (also on Onyx) comprised Shostakovich and Rachmaninoff sonatas, now add the third great Russian sonata to their canon. With a sound that is big but not brash, Elschenbroich opens the Prokofiev most eloquently, the lower notes of his 1693 Gofriller vibrating widely and the recorded sound warm yet spacious. The dreamlike second subject, even more delicately painted on its return, has the grace and lyricism of Prokofiev’s ballet music, and the movement’s close is subtly shaded. Frankfurt-born Elschenbroich, now based in the UK, revels in the Romantic melody of the Moderato and plays the high-speed scalic runs in the finale with lithe muscularity.

In the booklet, Elschenbroich expresses his desire to champion Kabalevsky’s 1964 Second Cello Concerto. He is a powerful presence in this work in which panic and urgency predominate, although at times his desperate cries are muffled by the orchestra. After the solo cello’s hard and penetrating pizzicato in the brooding opening, Elschenbroich, together with Andrew Litton and the Netherlands Philharmonic Orchestra,  gradually builds up a feverish pitch of tension, reflected in his rapid vibrato, before its total dissipation in the tender last movement.

Petr Limonov is the pianist in his own exceptionally well-crafted and beautifully characterised cello-and-piano arrangements of two Prokofiev opera and ballet themes.