‘You are forced to listen when there is no conductor’

Jacqueline Vanasse examines how performing without a conductor encourages individual players to listen and take responsibility, in this extract from the March 2022 issue 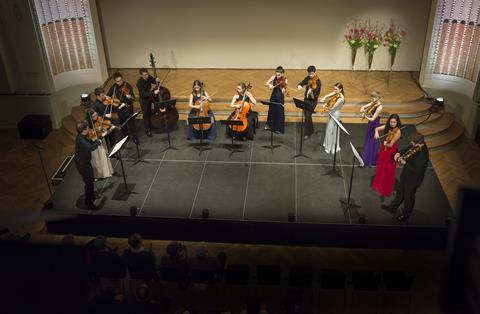 The following extract is from The Strad’s March 2022 issue  feature ‘The Leading Edge: Conductorless Orchestra’. To read it in full, click here  to subscribe and login. The March 2022 digital magazine  and print edition  are on sale now

Musicians in conductorless ensembles therefore do not rehearse to achieve a conductor’s vision, but instead practise together to achieve a collective goal. The fact that the impulses are coming from each of the players lends a wholly different dynamic to the ensemble. ‘As a player, you have a preconception of what you want to hear in the music,’ says Phillips, ‘but your colleagues have other ideas and so something new comes out of it all – something no one had previously thought of.’

When playing in an entity where no one person is imposing their ideas and where the common view is discussed and negotiated as a whole, musicians need to be quickly and actively absorbing what is going on around them. ‘A musician is not just waiting to be given their lead – every musician is responsible for playing at the right moment,’ says the artistic director of Quebec’s Longueuil Symphony Orchestra, Alexandre Da Costa, who ‘conducts’ from the violin. ‘Everyone needs to have a much deeper understanding of the score and to know what is happening in every section. This ends up being a lot more work, but it is also more rewarding as it makes the process of music making much more organic.’

With a conventional conductor, the orchestra can sometimes surrender all responsibility for decision-making and stop listening to the players around them. Without a conductor, however, the players have no choice but to take responsibility for their actions. ‘The sense of engagement is more intense for everybody,’ says Stephanie Gonley, concertmaster of the English Chamber Orchestra (ECO). ‘My gestural style does not change that much when I am directing the orchestra. Instead, the main difference is that everybody’s emphasis has shifted from the visual to the aural – the emphasis is on listening because there are fewer visual cues. People listen intensely and engage as chamber musicians. They have the sense that more is required of them.’ Thompson agrees: ‘You are forced to listen when there is no conductor, and you are much more connected with the sound that you are making. You are actively reacting to something as opposed to watching it and then reacting.’

Because responsibility is given back to the musicians, a conductorless setting can be fantastic for learning – a place to hone ensemble skills and problem-solving. ‘I find it most irritating when a conductor accuses the orchestra of not playing together,’ says Thompson. ‘It’s not helpful and offers no solution. When players perform without a conductor, they have to find solutions for themselves.’ They do this by asking questions then resolving them collectively, says Thompson: ‘They ask themselves, “Are we breathing together?” “Are we using the same bow speed?” “Are we making the same sound colour?” There are so many aspects of playing together to consider, so many solutions – and you have to try them all until it comes together.’

For Gonley, who was appointed concertmaster of the ECO in 1991, aged 24, this additional responsibility changed her perspective on music making entirely. ‘When I started with the ECO, the other players had to tolerate me learning on the job,’ she admits. ‘I think in the early days I was quite naive about certain things. I probably even stole ideas from other musicians and just enhanced them. My style of direction definitely evolved over time from slightly random decision-making to an organic process. When I am directing, I spend a lot of time and energy preparing the score. I think about pretty much every note and from every player’s point of view. Once you begin taking responsibility for every phrase like that, you can’t switch it off any more.’

Listen: The Strad Podcast Episode #24: Caroline Pether on the joy of playing in chamber orchestras