'The great challenge was to be comfortable improvising' – violinist Viktoria Mullova

For her latest recording, violinist Viktoria Mullova has collaborated with her son, jazz bassist Misha Mullov-Abbado in an eclectic array of duets. Harry White speaks to the pair about what they each found challenging about the project 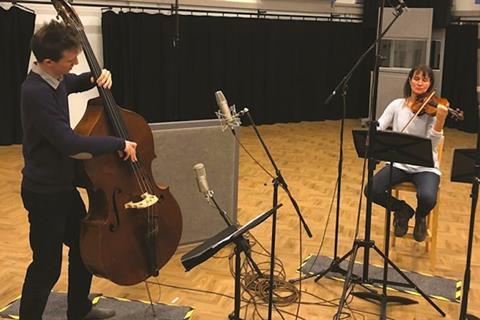 Mother and son record a varied mix of works for violin and double bass at the University of Surrey, UK

This is an extract from an article about Viktoria Mullova and Misha Mullov-Abbado’s new recording project in the August 2020 issue of The Strad. To read in full, click here to subscribe and login.The August 2020 digital magazine and print edition are on sale now.

‘For me,’ says Viktoria Mullova, ‘the great challenge was to become more comfortable with improvising. I had started doing more improvisation in past projects, but this was much more demanding, or perhaps more expected, because Misha is a jazz musician and it was always going to be a feature of the music that we played together. That was quite scary – really scary, actually, because it’s not what I do normally as a classical musician.’ To which Mullov-Abbado adds, ‘There’s a difference between having a fixed section of a musical work where you improvise within an ensemble which then moves together on to the next thing, and improvisation with just two people. In the latter scenario, you just have to say, “This section is going to be completely open and we’re going to figure things out together spontaneously and somehow end up somewhere else.”’

‘I was scared, but I also realised that it’s all right to be scared,’ continues Mullova. ‘I had to learn not to become fixated with perfection, but to be humble in my approach, to accept the mistakes, to learn from them. At the start of recording the very first track, after playing together for only a few minutes, we started to improvise. But each of us began to recognise what the other was doing, to anticipate and respond. It began to sound as if it was all written down, but it was not at all. And we never could recreate this moment on this track again! That was very beautiful – and, of course, the whole point.’

‘The great challenge for me was, to put it bluntly, playing with absolute precision and accuracy,’ says Mullov-Abbado. ‘It’s obviously something you work on as a musician in any genre, but as a jazz bass player primarily, I’m aware of the cover I have within the rhythm section. Aspects such as intonation are just not as exposed in that setting, and against a fixed-pitched instrument like a piano I can adjust quickly. But in this I felt brutally exposed.’

Freedom, exploration, unconstrained spontaneity. These are all words that one associates with jazz playing. Interestingly, however, it was in the catalytic ebb and flow of Bach’s music that Mullov-Abbado found one of his greatest challenges. ‘The bedrock of most of the jazz I play is good timing and rhythm,’ he explains. ‘Good rhythm in the sense of being disciplined and metrical. Playing Bach in a Baroque style, with its twists and turns, breaks away from this, and I found that really hard. I so rarely have to play music that involves moving from the rigid metrical framework that a rhythm section provides.’