Julian Rachlin’s tips on the first movement of Brahms Viola Sonata no.1

Tips on finger placement, bow distribution and character in the F minor sonata, taken from the March 2018 Masterclass 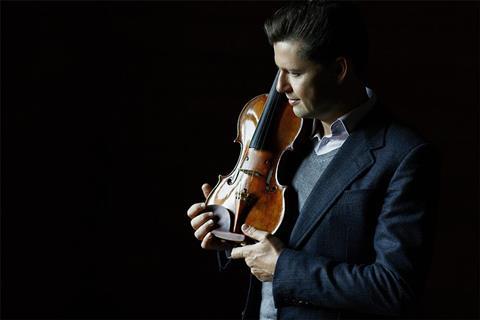 The following extract is from The Strad’s March 2018 Masterclass: Julian Rachlin on Brahms’s Viola Sonata in F minor. To read it in full, click here

This sonata was one of Brahms’s last works, inspired by Richard Mühlfeld, a clarinettist in the orchestra in Meiningen, Germany. It was originally for clarinet, but Brahms wrote the viola version himself, revising it only slightly to suit the instrument. Violists claim it as a viola sonata; clarinettists think it’s theirs! I’ve listened to many clarinettists perform it, to hear their musical ideas, but I don’t think we as violists need to base our interpretations in any way on the clarinet version. Either way we must thank Brahms: we don’t have many viola works from the earlier great composers, so his two op.120 sonatas are extremely important for us.

For me, finger preparation is a very important element of violin and viola playing. Where possible, the first finger should at all times be on the string, especially during practice, for intonation reasons. I am strictly against playing with the first finger waving in the air above the fingerboard (and I see this all the time), because for string players the first finger is the foundation of everything. It is fine to break this rule consciously, perhaps if you want to open up the first finger because your hand feels locked, or because it helps you to express the music in a certain way, but as a basic rule the first finger should always be down.

In bar 93 of the first movement, I have written ‘sparen’ to indicate that the bow should be saved. Often people use too much bow, especially on the last three notes of this bar, when for me it should be the opposite. Even if a note is longer and requires more emphasis than others in the phrase – such as the A flat at the beginning of the bar here – it doesn’t need more bow. If you are driving a car and you want to start moving, you will put your foot on the pedal and the car will gradually accelerate. For me, the same is true for each new bow: the first note will use the least, the second a little more, a little more still on the third, and still more on the last. This system allows you to give the illusion of having a never-ending bow.

In both movements, think carefully about how much bow you want to use, how you are going to divide it, where, and why, and make a plan for yourself. Technical virtuosity is not about how fast you can play, but about analysing why you are playing something, at what speed and where in the bow. Thinking about these things at home will help you to organise your thoughts and govern the way you play in performance.

Pay attention to the important changes of colour and character in this work: in bar 83, for example, where you can think of these three beats as an up-beat into the very introverted and intimate second theme. From bar 96 the character becomes espressivo and deeper, with another change of colour from the final three notes of bar 99 – which again is very subtle and vulnerable – as in bar 103 and its echo in bar 104. Make sure you move on to the D string from the end of bar 106, for a different colour; and prepare for another colour change in bar 112, where there is an important dialogue between the viola and the piano. I don’t build up at all in this passage, so that I can play subito forte, with a real scream, from bar 116. Bars 120–121 should be very rhythmical.

From bar 206, one has to find a very warm, generous colour, with a kind of light. You can really take time in bar 210. Don’t slow down – everything has to be very organic – but just stretch it a little bit, to bring yourself into the sostenuto at bar 214. This should be quite free, and not a subito sostenuto. This is a late work, and it should not be played with the character of a young, hungry person, but of an old man enjoying a cigar and a beautiful old whisky, philosophising about the life that he has had. The viola is the perfect instrument to give you this heavier feel.

Read: ‘I think of the countryside when I play this’ - Antoine Tamestit on the third movement of Brahms’ Viola Sonata op.120 no.1