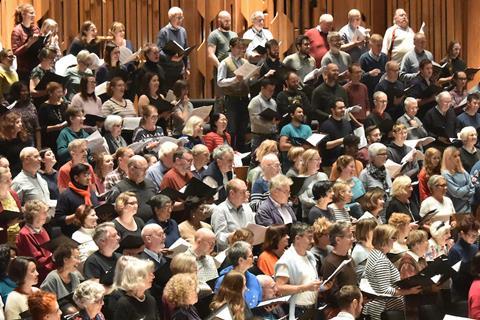 The London Symphony Chorus is to launch a musical tribute to the UK’s health and care workers. Composed by Howard Goodall, and recorded virtually during lockdown, Never to Forget pays homage to the 122 workers who were among the first to have died from Covid-19 (by 25 April 2020). Its text is made up entirely of their names, taken by the composer from Nursing Notes, a nursing news website ‘run by nurses for nurses’. The premiere performance, which will take place at 10am (GMT) this Sunday 5 July to coincide with the anniversary of the founding of the NHS, features 100 singers from the chorus, alongside members of the London Symphony Orchestra and the composer himself. It can be viewed here: https://bit.ly/2B8G5LM

Commenting on the piece, Howard Goodall said: ‘Like so many creative artists I have been wanting to respond to the pandemic crisis in a way that would seem appropriate and sensitive to those who have been at the forefront of the struggle and that would demonstrate to them our collective solidarity and gratitude.  The dedication and sacrifice of key health and care workers has been truly humbling.  A choral work, even one that could initially be compiled from singers’ own homes, seemed fitting.  Its text, entirely comprising the names of those nurses, doctors, carers, porters, cleaners, paramedics, ambulance drivers who leave behind mourning families, friends, communities.  Unlike a stone memorial, though, this work will continue to grow and honour its fallen heroes, so the initial virtual recording is made up of the first 122 health and care workers who had died by April 25th of this year.  By the same time in 2021, the piece will be expanded, and a version performed live that has all the names subsequently, tragically, added.’

The London Symphony Chorus hope to perform this extended version of the piece for a live audience when it is safe to do so, and hope that some of the families and colleagues affected will be able to attend the performance.

Simon Halsey, choral director of the  London Symphony Chorus, said: ‘We felt that we must do something to acknowledge the extraordinary contribution made by health and care workers at a time of international crisis and this piece offers us a chance to get involved in a meaningful project: one that we hope will enable us, as a music community, to give back something to those affected by the crisis.’