A method for viola-playing, according to Karen Tuttle

Violists, particularly in the US, regard Karen Tuttle as a pioneer of pedagogy. As this month marks the 100th anniversary of her birth, Carlos María Solare outlines some of her ideas on playing the viola 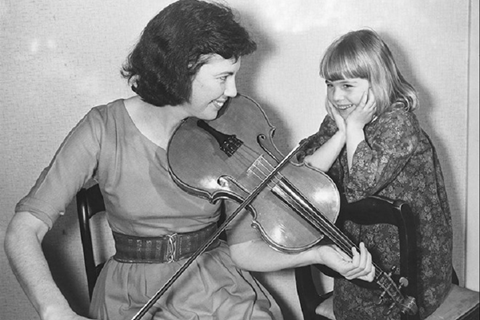 Karen Tuttle and her daughter Robin

Karen Tuttle’s method, which according to her former student Karen Ritscher is more a ‘non-method’, as it is so closely tailored to each student’s specific needs, is a very physical affair that can best be experienced by demonstration. Verbal description risks making it sound banal, as every element seems so obvious by itself, starting with finding the body’s balance and getting rid of all excess tension by coordinating every movement. The head should look ahead, with the viola pivoting on the jaw – Tuttle maintained that the chin rest should be called a ‘jaw rest’.

As the right arm is extended outwards at the end of the down bow, the head goes up, ‘releasing’ the neck; none of the joints is bent to an extreme position, and the sound can lead on to the next note. The bow hold – ‘grip’ doesn’t exist in Tuttle’s vocabulary – relies on arm weight rather than finger pressure; Tuttle taught what she called ‘re-pull’, which might be described as a ‘second down bow’ that takes place one third of the way down the bow, at the point where one would otherwise begin to pronate the right arm, a procedure that’s given to unwanted pressure.

This is followed by what Tuttle called ‘over the bow’, in which the tension of the ‘re-pull’ is released. In the left hand, finger motion comes from the knuckles, fingers ‘plopping’ on the string, the wrist staying supple. Viola playing has to ‘feel good’, Tuttle always insisted; if it doesn’t, something is wrong!

Looking for what Casals called the music’s ‘character’, Tuttle came up with a list of ‘Five Basic Emotions’ – love, joy, anger, fear, sorrow – that were themselves subdivided into many nuances. She would ask students to name the emotion they were aiming for in any given phrase, ensuring that they were never just going through the motions.

To read the full article on Karen Tuttle, which pays tribute to her career, teaching methods and formidable strength of character, click here to log in or subscribe