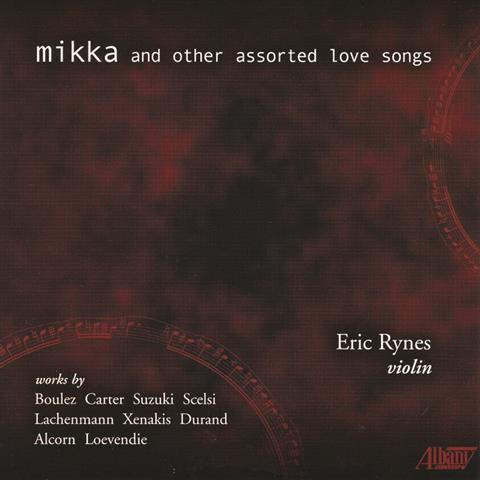 The recorded sound on this disc is precise and pristine, the album title a reference that will appeal to aficionados of rockist blues. Eric Rynes offers up a whistle-stop tour of some modern classics of unaccompanied violin repertoire with new works by Kotoka Suzuki and Michael Alcorn added to the mix, and much is revealed about the attitudes taken towards the violin by contemporary composers.

The steadily evolving drones of Scelsi’s L’me ouverte (1973) issue an invitation to bathe in the resonant overtones generated as the violinist, playing scordatura, touches subtle deviations of pitch across different strings; the resulting sounds are scraped out of the instrument. Helmut Lachenmann’s Toccatina (1986) – with its deconstruction of conventional technique leading to a palette of balletic scratches, rumbles and trickles – similarly opens up hitherto hidden sides of the violin, as do the piledriver block chords characteristic of Xenakis’s Mikka (1971).

In this company, Joël-François Durand’s Roman (1982), Carter’s Riconoscenza (1984) and Boulez’s Anthèmes I (1992) register as contrived, pitch development imposed on the violin without too much thought as to how those ideas operate as sound. The Suzuki and Alcorn pieces exploit electronics resourcefully, their plugged-in possibilities making familiar tones warp; Theo Loevendie’s Dance (1986) is a spunky encore delivered with the devil-may-care attitude Rynes exhibits throughout.