Mišek Double Bass Sonatas no.1 in A major op.5 & no.2 in E minor op.6, Concert–Polonaise 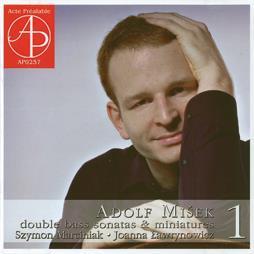 Polish-born Szymon Marciniak, now principal double bassist of The Hague Philharmonic, puts in impressive performances on his first volume of sonatas and miniatures by the Bohemian Adolf Mišek (1875–1955). The first two sonatas are separated here by the Concert–Polonaise, allowing Marciniak to show off his flair for melodic decoration and – usually reserved for the smaller stringed instruments – for more overtly virtuosic skittering along the fingerboard. It perhaps helps that Mišek himself knew the instrument intimately, having been principal of the Vienna Philharmonic after leaving his native Bohemia, before moving on to the Prague National Theatre orchestra.

It’s in the slow movements that Marciniak impresses most, according Mišek’s light Romantic style a natural melodic instinct, plenty of nuanced tonal colouring, supple rubato and an improbably seamless legato line. With this level of elegance, there’s never any impression of employing a sledgehammer to tap in a nail.
This isn’t to diminish Marciniak’s lightness of touch and rapid string-crossing in the finale of the Second Sonata. There could be more fire in the first movement of the same work, but there’s no lack of momentum. The recording presents a good mix, the solo instrument clearly portrayed as dominant, but not as a towering monster.