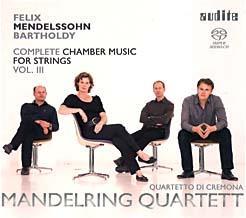 The Mandelring Quartet, in concert or on disc, always achieves an instinctive internal balance, and here the players bring their distinctive blend and contrast of tonal timbre to the three quartets Mendelssohn had completed by his 20th year. That the earliest work, from 1823, is heavily indebted to the influences of Haydn and Mozart does not detract from the young man’s gift of melody, and the players point to the youthful sense of fun and joy with outer movements bouncing along with appropriate energy. Of particular delight is their Minuetto, performed as a foretaste of a composer who would bring elfin charm to the music of his day.

Op.13 came four years later – predating op.12 by a year – by which time the late music of Beethoven had made a profound effect on the young man. The Mandelring musicians invest its opening movement and Presto finale with abundant drama to contrast with the lightweight Intermezzo. They underscore the genial aspects of op.12, with its mercurial scherzo that could have come straight from A Midsummer Night’s Dream, and the finale emerges as a veritable whirlwind.

Throughout, the playing is technically immaculate and the whole disc is recorded with absolute clarity. One looks forward to the promised continuation of this complete edition of Mendelssohn’s string chamber music.