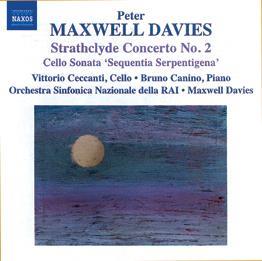 Peter Maxwell Davies’s Strathclyde Concerto no.2 of 1987 appears here for only the second time on disc (the first was by William Conway on Unicorn-Kanchana in 1999), in a skilfully balanced recording of a live performance conducted by the composer in Turin. It’s a major work both in length (35 minutes) and substance, its dense layering incorporating rather than opposing the cello. What makes it attractive for the cellist is not only its broad songfulness (though not in a sweet, conventionally lyrical way), but its tense narrative of the cello’s upward struggle – even the broad lines of the second-movement Lento do not flourish unburdened. Vittorio Ceccanti is alert to both these qualities. His tone avoids appearing suave, but it’s underpinned by well-judged eloquence. The orchestral writing is rich and inventive, and the pacing absolutely assured to the point that this concerto almost feels like a darkly coloured tone poem. On that basis, this should by now have become a repertoire piece.

The concerto is accompanied by premiere recordings of three smaller-scale works. The Cello Sonata (2007), inspired by a medieval stone carving of a serpent in a Tuscan church, is a more process-driven work, but it allows Ceccanti to display a range of playing techniques to his advantage. His touch, though, is slightly heavy in the remaining, folk-influenced, items on the disc.