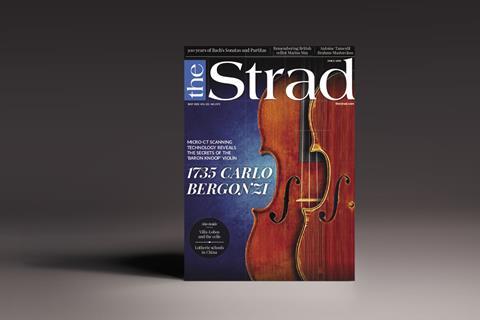 The study of instruments has come a long way. From the humble tape measure and callipers to sophisticated CT-scanning and dendrochronological analysis, our methods of non-invasive investigation and attribution have expanded in recent years to reveal even the smallest of details. This month’s poster for subscribers features Carlo Bergonzi’s ‘Baron Knoop’ violin of 1735, the measurements for which have been taken almost exclusively with micro-CT scans. It’s a technique that allows us to calculate distances between two points anywhere on the instrument’s surface, and thus provides remarkably accurate insights into its form and construction – as Rudolf Hopfner explains on page 28.

Yet the ‘Baron Knoop’ is so much more than the sum of its parts – a work of art by a virtuoso maker at the top of his game. Bergonzi was highly influenced by the designs of Stradivari and Guarneri ‘del Gesù’, and completed many of the former’s instruments after his death in 1737. Despite this, the younger maker developed his own personality and style, clearly on display in this priceless violin, as Andrea Zanrè shows on page 22.

Had Bergonzi lived longer than his 63 years, he may well have developed a reputation to rival that of his idols. As it is, we have the tragic sense of a career cut short in its prime. A similar claim can be made about the life of British cellist Marius May, who died last year at the age of 61. In many ways the successor to Jacqueline du Pré, May showed immense promise as a teenager, yet abandoned public performance and recording while still a young man due to the pressures of life as a soloist. On page 50, his brother Simon remembers not only a precocious talent, but a perceptive and mischievous soul, while former colleagues Steven Isserlis, Julian Lloyd Webber and Imogen Cooper add their reminiscences.