Born almost 40 years after Stradivari, Carlo Bergonzi completed several of the master maker’s instruments after his demise. Andrea Zanrè shows how his ‘Baron Knoop’ violin of 1735 displays an unmistakable personality despite the influence of Stradivari and his contemporaries 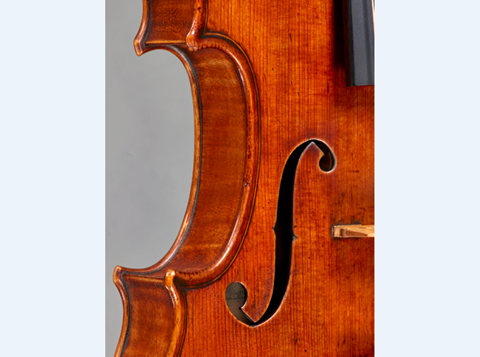 The left f-hole of the ‘Baron Knoop’ shows a self-confident, refined execution

The following extract is from The Strad’s July issue cover feature on Carlo Bergonzi’s 1735 ‘Baron Knoop’ violin. To read it in full, click here to subscribe and login. The July 2021 digital magazine and print edition are on sale now

Stradivari had overwhelming success relatively early in his career, which may have influenced his experimental approach to violin making. By contrast, Carlo Bergonzi’s early work met with more modest fortune, and his early style consequently looks a bit more tentative. The Cremonese archives contain just feeble traces of his actual relationship with Vincenzo Rugeri, and we can only guess what Bergonzi’s precise role in that workshop was. After Rugeri died in 1719, Bergonzi was probably left with but a few choices. He could have started an independent career, but the scarcity of his instruments with original labels pre-1730 seems to suggest he only did this after turning 40 or even 45 years of age. He could have joined with the ‘official’ tradition, then represented by Giuseppe Guarneri ‘filius Andreae’, who has been long considered his actual teacher because of exterior similarities in their styles – but Giuseppe himself during that time was striving to sustain his own family. Lastly, he could have turned to Cremona’s most successful maker, Antonio Stradivari, although by that time Francesco and Omobono were highly experienced, and the young Giovanni Battista Martino had grown enough to provide help as well. Perhaps it is not by chance that Bergonzi’s cooperation in Stradivari’s workshop becomes especially noticeable after Giovanni Battista Martino’s untimely death in 1727, when Antonio could no longer rely on a steady line of succession. Bergonzi’s hand shows itself most clearly in the demanding task of making cellos, such as the c.1727 ‘Bein, Fruh’ and the 1732 ‘Pleeth’.

For these reasons, Bergonzi’s career remains quite elusive up to the flourishing of his so-called ‘golden period’, which basically occupies the whole decade of the 1730s. Christopher Reuning and the group of experts who cooperated on the catalogue from the 2010 Bergonzi exhibition in Cremona illustrated in detail the initial attempts by which Carlo Bergonzi acquired a real mastery that, in truth, never stopped evolving. By 1735, the year the ‘Baron Knoop’ was made, his style had crystallised into what we may consider an archetype.

Gallery: From the archive: a c.1720 violin by Carlo Bergonzi

Although Bergonzi probably never reached the (rarely experienced) status of a wealthy luthier, he still used the best-quality maple ever seen: the one-piece back of the ‘Baron Knoop’ is one of a series of violins made with material of a stunning wide, deep flame. We also encounter this wood in, for instance, the 1732–34 ‘Earl of Falmouth’, the 1733 ‘Salabue, Martzy’ and several later instruments. Top-quality imported maple and fine-grained Alpine spruce are no exception for the most well-heeled Cremonese makers of the 17th and 18th centuries, but they are notable for a luthier of Bergonzi’s lower status.