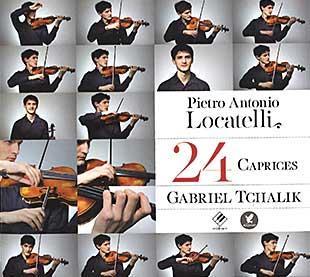 Gabriel Tchalik here tackles Locatelli’s caprices, totally divorced from the concertos they adorn. He reproduces their unprecedented sonorities and meets their formidable technical challenges not only with breathtaking vigour and athleticism but also with commendable artistry.

Captured over a three-month period, this reverberant church recording reveals some inconsistency of acoustical context, which may be the result of the extended recording spell, multiple takes or editing irregularities. Nevertheless, the outcome is strikingly successful. Tchalik’s intonation remains remarkably true (if sometimes a little sharp) whatever the technical demands. And whereas many violinists sound under pressure when Locatelli applies the thumbscrews, Tchalik remains unmoved and focused on his musical goals. Admittedly, not all the minute details come across crystal clear, notably in the theatrical nos.2, 8 and 17 or the percussive no.12. But a remarkable proportion of them do, particularly given the awkward extensions in no.21 and the high passagework of no.22.

Even Tchalik seems to have his hands full in the notorious final ‘Labyrinth’ caprice, which he nevertheless dispatches with fearless abandon and uncanny levels of technical athleticism. However, although he is a persuasive advocate of Locatelli’s fertile imagination in the capriccios themselves, he does not consistently display his own in the extempore cadenza opportunities afforded him.